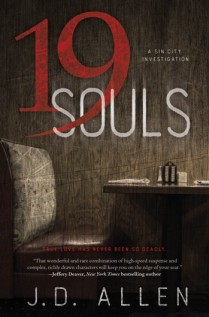 Private Investigator Jim Bean is a straightforward, to-the-point man. When his latest client, Sophie Evers, asks him to find her brother Daniel, Jim has no idea how complicated his life is about to become.

Daniel is not Sophie’s brother. He is her most coveted prey. Clinging to the belief that they belong together, Sophie kills Daniel’s real sister to manipulate Jim into flushing Daniel out of hiding. She will create the “perfect life” for the only man she’s ever loved, no matter how many people she must kill along the way.

When Jim discovers the truth about Sophie, he’s driven to set things right before her delusional plan claims even more souls.

This fast-paced, action packed drama grabbed my attention immediately, quickly becoming a page turner as I could not put this book down until the last page was read. From the start, the narrative was gripping descriptive as the voices of Jim, the private investigator and Sophie, the serial killer was heard, giving me a better perspective on their personalities. The premise was suspensefully intoxicating keeping me in tuned to all that was happening. The author took me on a captivating ride as I didn’t know what Sophie would do next and it was Jim’s response that had me rooting for him to overcome his misstep. Where the drama holds me is in the psychological game that Sophie believably plays and the determination of Jim to make it right. Overall, a good rocking thriller that is rivetingly dangerous.

FTC Full Disclosure – I received an Advanced Reader Copy (ARC) from the publisher.

Like Loading...
This entry was posted in Reviews and tagged J.D. Allen, Midnight Ink, private investigator. Bookmark the permalink.