A day in the life with Jenny Vega Healy: The Phone Call by Michele Campbell

Posted on May 19, 2017 | Comments Off on A day in the life with Jenny Vega Healy: The Phone Call by Michele Campbell

Jenny’s office in Town Hall looked across the main square to the Belle County Courthouse. On gray days like this one, the grim, stone façade of the courthouse gave her a queasy feeling. The County Attorney’s Office was in there, on the fourth floor. Those folks were supposed to be her allies, but lately they seemed a little too interested in asking questions about her personal affairs. In particular, the ins and outs of her husband’s construction business, and how he always managed to get the inside track on big contracts from Carlisle College. Carlisle was Jenny’s alma mater – the storied Ivy League school down the road that ran this town and everybody in it. Tim got the contracts because Jenny was a Carlisle alum, and Carlisle liked dealing with its own. That answer ought to satisfy anyone with the nerve to ask interfering questions. No need to dig any deeper. But if they did, if they started asking questions about her college days or what happened that night at the bridge – well, she wouldn’t let herself think about where that could lead.

The phone lit up. A minute later, her secretary buzzed.

Jenny’s closest friend, her roommate from freshman year at Carlisle, Aubrey Saxman was one of those people who’d loved college so much that she never left. Jenny didn’t get it. She’d grown up in this one-horse town, and had wanted nothing more than to escape, to strike out for new horizons. But Carlisle gave her that scholarship, and she couldn’t afford to say no. She’d never intended to stick around after graduation, either; in fact, she didn’t. She ran as fast as she could in the opposite direction, and stayed away until family obligations called her back. Now she was dug in here, with a marriage, kids, and a political career to protect. As much as Jenny loved Aubrey, she didn’t need the drama her old roommate brought. There was always some crisis. What would it be this time?

“You’re not gonna believe this. Guess who’s moving back to town?”

Jenny’s stomach lurched. Kate was the third roommate, the glamorous wild child who’d made their lives exciting. Too exciting — she’d nearly dragged them down. Jenny’s mind flew back to that awful night twenty years ago, at the old railroad bridge. The three of them had kept the secret ever since, and Jenny’s entire life hinged on remaining silent. She trusted Aubrey to keep her mouth shut. But Kate? Nobody could trust Kate about anything, ever.

“Kate, moving back?” Jenny said, her voice cracking. “You can’t mean that. She knows better than to come back here. You must mean she’s coming for a visit, right?”

“No. Her dad owns that house on Faculty Row. She’s going to live there for a while, and keep a low profile because of those legal problems her husband’s having. Jenny, I’m not kidding. Kate is coming back to stay.”

You can read more about Jenny in It’s Always the Husband.

Kate, Aubrey, and Jenny first met as college roommates and soon became inseparable, despite being as different as three women can be. Kate was beautiful, wild, wealthy, and damaged. Aubrey, on financial aid, came from a broken home, and wanted more than anything to distance herself from her past. And Jenny was a striver—brilliant, ambitious, and determined to succeed. As an unlikely friendship formed, the three of them swore they would always be there for each other.

But twenty years later, one of them is standing at the edge of a bridge, and someone is urging her to jump.
How did it come to this?

Kate married the gorgeous party boy, Aubrey married up, and Jenny married the boy next door. But how can these three women love and hate each other? Can feelings this strong lead to murder? When one of them dies under mysterious circumstances, will everyone assume, as is often the case, that it’s always the husband?

A suspenseful, absorbing novel that examines the complexities of friendship, It’s Always the Husband will keep readers guessing right up to its shocking conclusion.

Michele Campbell is a graduate of Harvard College and Stanford Law School and a former federal prosecutor in New York City who specialized in international narcotics and gang cases. A while back, she said goodbye to her big-city legal career and moved with her husband and two children to an idyllic New England college town a lot like Belle River in It’s Always the Husband. Since then, she has spent her time teaching criminal and constitutional law and writing novels. She has had many close female friends, a few frenemies, and only one husband, who – to the best of her knowledge – has never tried to kill her. Michele currently lives in New Hampshire.

Connect with Michele at michelecampbellbooks.com.

Comments Off on A day in the life with Jenny Vega Healy: The Phone Call by Michele Campbell

My Musing ~ It’s Always the Husband by Michele Campbell 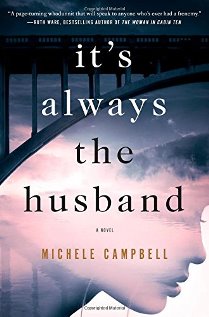 Kate, Aubrey, and Jenny. They first met as college roommates and soon became inseparable, even though they are as different as three women can be. Twenty years later, one of them is standing at the edge of a bridge . . and someone else is urging her to jump.

How did things come to this?

As the novel cuts back and forth between their college years and their adult years, you see the exact reasons why these women love and hate each other—but can feelings that strong lead to murder? Or will everyone assume, as is often the case, that it’s always the husband?

Three college roommates are haunted by the past which threatens their existence in present day when a death occurs and the past wreaks havoc on a list of suspects who could have done the deed. The book pulled me in immediately with a secret that the author divvied up in scene after scene after scene, creating a compelling drama of deceit, jealousy and hatred. What happens next is contained in this cleverly written tome where the narrative encompasses how well this book is staged that kept me enthralled in all the interactions taken place with the various characters who all played a pivotal role in the outcome and boy what an outcome this was when it came to light what really happened. That I didn’t see coming. Bravo to the author for the execution of this well written and engaging story that boasted an eclectic cast of characters, an imposing background setting and dialogue befitting this multi-plot drama. This was a terrific read and I’m glad to see this author back with a new book.

FTC Full Disclosure – I received an Advanced Reader Copy (ARC) from the author.