A day in the life of Slim Moran, detective for the lost, by Kate Moira Ryan

Posted on December 16, 2017 | Comments Off on A day in the life of Slim Moran, detective for the lost, by Kate Moira Ryan 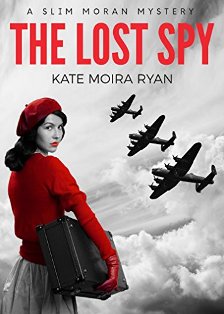 When I was a schoolgirl at the Convent of The Sacred Heart in New York City, I lived with Maps, my governess, in an enormous apartment overlooking Central Park. My father, Tyrone Moran, was a movie star who was rarely home and when he was, he was out with a string of women, one younger than the next. On Sundays, Maps and I would venture into the park with our drawing pads and crayons. She was an amateur artist and in my view, a very bad one, however, I was even worse. She used to say to me, “A good artist notices every detail. It’s in the details that great art comes.”

As a detective for those lost in World War Two, I’ve always taken that lesson to heart. I spend hours pouring over my notebooks scouring the details. Sometimes one pops up that may seem insignificant, but really is the most important clue of a case. Take this morning for instance, I was sitting in La Silhouette, the bar I own with Marlene Dietrich’s ex-lover, Françoise, going through my notebook for my latest case, a missing Polish boy, Karol, kidnapped by the Nazis and Germanized. His mother Lena, had given me a photo of both of them shortly before they were separated by the SS in the town square of Zamość in 1942. Something caught my eye, it was a gold watch on Lena’s wrist shaped like a heart. Where had I seen that watch before? Before I could think, Françoise came over with a bowl of café au lait and then barked at Remy, her assistant, to mop the floors. Then the door opened and a deliveryman came in with the liquor delivery. He nodded to me and went straight to Françoise who lit her ubiquitous Galouise and moved her wrist to glance at her watch. The watch face was turned on the back of her wrist and then it hit me. The German nurse I had interviewed in Ebensee wore a watch identical to Lena’s except it was facing backwards as if she was hiding it from me. The nurse had professed not seeing Karol when she ran her infamous children’s home which had warehoused the children kidnapped from Poland.

Why did the nurse have Lena’s watch? And how did a poor Polish maid get a watch like that in the first place?

Françoise sat down. She stubbed out her cigarette. “You’re stuck,” she noted looking at me staring at my notebook. “Remy, after the floors are done wipe down the bar.” She caught my look at disapproval, rolled her eyes and then said, “Please.”

“I am stuck.” I said. “Look at this watch this woman is wearing in this photograph. It’s gold in the shape of a heart with diamonds around the face. The thing is, she’s a maid, so how did she get this watch in the first place?”

Françoise studied the photo and then said. “There are two ways someone like that gets a watch; either it’s stolen or it’s from a lover. And since she’s wearing it so blatantly, it must be from a lover. Trust me I know.”

She got up and left. I studied my notebook. Françoise was right, but who was Lena’s lover? Had she given the nurse her watch or had it been taken? Sometimes, it’s the smallest detail that opens a case wide. Other times, it’s a red herring that leads me into a maze with a dead end. The watch was more than a clue, it was a metaphor for the case, time was running out. I had three weeks to find this boy or his mother would be gone forever to Chicago. Then something else occurred to me; the watch was more than a clue. It was probably used to save the boy’s life. I knew had to find that nurse again and ask her what she had done with he lost boy. I slammed by notebook shut. It was time to travel back to Germany.

You can read more about Slim in The Lost Spy, the first book in the “Slim Moran” historical series.

It is Paris, 1949. 27-year-old American detective and heiress, Slim Moran, is hired by a British spymistress to find Marie-Claire, a spy long presumed dead. Slim soon realizes that scores from the last war have not been settled. She races to find out what happened to this deeply troubled lost spy because if Marie-Claire is not dead, she will be soon.

About the author
Kate Moira Ryan is an award-winning playwright. Her work was been produced nationally and internationally. She is recipient of two GLAAD Media Awards. Her first book in “The Slim Moran” Mystery Series, The Lost Spy won a Kindle Scout campaign and is published by Kindle Press.

Comments Off on A day in the life of Slim Moran, detective for the lost, by Kate Moira Ryan