A day in the life of Daria Dembrowski by Greta McKennan 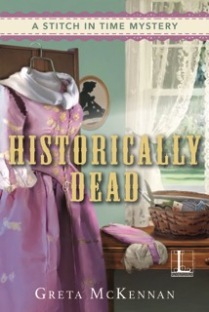 What a day! In the space of twenty-four hours I learned that my client’s will was stolen, handled a mortuary urn containing the remains of a man who died in a house fire, cobbled together an eighteenth century gown for a crotchety old lady, met a grad student at the university and heard a shocking story of treason that took place during the Revolutionary War, took a road trip from my small town of Laurel Springs to Philadelphia, witnessed a fire on my front porch steps, fit a wedding dress for the bride-to-be of my former fiancé, and almost beaned my brother over the head with a cast iron skillet.

I wonder what tomorrow will bring.

The worst part was the fire. I was on my way home from Philly with my favorite obnoxious photographer Sean McCarthy when we saw the smoke rising from my downtown neighborhood. We followed the fire trucks to my house, a solid three-story building dating from the mid-nineteenth century that was home to me, my older brother Pete, and my housemate Aileen, the lead singer in the metal band, the Twisted Armpits.

A pile of brush on the porch steps was on fire. When I looked closer, I saw that it was my new Japanese maples, the ones that I had rescued from the renovations at Compton Hall. My sweet old client Priscilla Compton had arranged for them to be torn out because they weren’t historically accurate. She was in the midst of restoring her house to its original state from the eighteenth century, as part of the TV reality show, My House in History.

“Out with the new, in with the old,” the gardener had said as he uprooted the trees. As the only historical seamstress in town, my job on the set was to sew period clothing for Priscilla and her ornery sister Ruth. If Compton Hall got the most votes from viewers, Priscilla would win a million dollars. I wasn’t sure it was worth a million dollars to destroy Priscilla’s prize-winning Japanese maples.

Pete and I had rescued two of them and transplanted them in front of my house, and now they were burnt up. I felt like crying. After the smashed eggs and the dead mice strewn all over the porch, not to mention the creep who tried to break into the house in the middle of the night, this was the last straw. Somebody was definitely trying to intimidate us.

Of course, nobody could intimidate Aileen. Standing six feet tall without her six-inch boot heels, she stomped around the porch barefoot in a black trench coat with her hair up in a towel, trying to put out the fire. She looked like she was ready to take on all foes. But were any of us ready to tangle with a murderer?

Read more about Daria Dembrowski in Historically Dead, the second book in the “Stitch in Time” mystery series.

Seamstress Daria Dembrowski must find a historically-minded killer before the fabric of her peaceful town rips wide open . . .

When the reality show My House in History comes to Laurel Springs, Pennsylvania, savvy seamstress Daria Dembrowski sees a business opportunity. The show follows two elderly sisters’ quest to restore their colonial mansion, and that means a heap of work for a seamstress who specializes in historical textiles. Although one of the old women is a bit of a grump, Daria loves the job—until she discovers one of the researchers dead, and the whole project threatens to unwind.

As a series of historical crimes pile up, from a stolen Paul Revere platter to a chilling incident of arson, Daria must find the killer quickly, for her life is hanging by a thread.

Meet the author
Greta McKennan is a wife, mother, and author, living her dream in the boreal rainforest of Juneau, Alaska. She enjoys a long walk in the woods on that rare sunny day, reading cozy mysteries when it rains, and sewing the Christmas jammies on her antique Singer sewing machine. She is hard at work on the next novel in her Stitch in Time Mystery series featuring seamstress Daria Dembrowski. Find her online at www.gretamckennan.com.

Like Loading...
This entry was posted in A DAY IN THE LIFE and tagged cozy mystery, Greta McKennan, Lyrical Underground. Bookmark the permalink.