Posted on November 29, 2017 | Comments Off on A day in the life of Sister Louise “Lou” LaSalle by Olivia Matthews 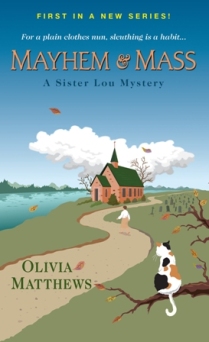 Routine. Uneventful, but exceptionally fulfilling. That’s how I describe my life.

Or at least that’s how I used to describe it.

Every morning, with the exception of Sundays, my alarm clock wakes me before the sunrise. I climb out of bed in my cozy little quarters in the Motherhouse where I live with 63 other Catholic sisters of the Congregation of St. Hermione of Ephesus. You’ll find us in Briar Coast, New York. The town, which is located just outside of Buffalo, is home to fewer than one thousand people. I know, pretty tiny.

I always make my bed before kneeling beside the mattress for my morning prayers. At the age of sixty-three, that’s not always as easy as it sounds, but I believe that starting the day with a grateful heart helps keep things in perspective. After giving God thanks and asking for His guidance throughout the day, I get dressed to meet Sister Carmen “Carm” Vega for our five-mile morning run.

Sister Carm and I have been running together six days a week for more than six years since the day after we moved into the Motherhouse. We’re both from California. I was born in Los Angeles. Sister Carm was born in Mexico, but grew up in San Diego. We quickly became friends. I love her unquenchably optimistic outlook on everything, and I think my pragmatic approach keeps her grounded.

Our makeshift jogging trail carries us around the Motherhouse with its adjoining congregational office building, then to the campus of the College of St. Hermione of Ephesus. You’re right; the school’s name is not a coincidence. The congregation founded the college in 1871 as an educational institution for women. It became coeducational in 1965. The college’s campus is beautiful, especially its oval set in the center of the grounds. It’s surrounded by red brick buildings, stately trees, rolling lawns and evergreen bushes. Sister Carm and I run laps around the oval before veering off onto the dirt path of a nearby park that leads to the heart of Briar Coast. To complete our five-miles, we run everything in reverse, ending where we began – at the Motherhouse.

After cleaning up and rejoining each other for breakfast at the Motherhouse’s floral décor dining room, Sister Carm goes to work at the college where she’s a professor of Theology. I used to teach Philosophy at the college before I left to serve full-time on the congregation’s leadership team. I miss being on campus every day. Thankfully, Sister Carm and my nephew, Christian “Chris” LaSalle, the college’s acting vice president for advancement, keep me informed of the college’s latest news and events. Chris also gives me great insight on the Briar Coast community through his extensive social network.

As part of my role on the congregation’s leadership team, I have the pleasure of planning our events, including our annual feast day for St. Hermione of Ephesus. This year’s celebration features a world-renown speaker, Dr. Maurice “Mo” Jordan. Mo also happens to be a dear friend. We met in graduate school and have been friends for more than two decades although our hectic schedules make it hard to get together.

Not everyone at the congregation is as excited as I am that Mo is going to be the guest speaker. Sister Marianna Tuller has made her displeasure abundantly – and incessantly – clear. Still it never occurred to me that Mo was in mortal danger – until I found him bludgeoned to death in his hotel room.

Deputy Fran Cole and Deputy Ted Tate of the Briar Coast County Sheriff’s Office insist on putting every sister in the congregation – all 63 of us – on their suspects list. Isn’t that absurd? Perhaps they’re taking such a ridiculous approach to the investigation because they’re uncertain of what they’re doing. After all, Briar Coast has had only one murder in the past eight years. That case wasn’t even investigated since the murderer confessed at the scene.

Mo’s murder also has drawn the attention of a new resident to Briar Coast, Sharelle “Shari” Henson, a reporter with The Briar Coast Telegraph. Shari is almost as anxious to learn who killed Mo as I am. We both agree that no one in the congregation could be involved, not even Sister Marianna. Besides there are plenty of other suspects, including:

If the deputies aren’t going to interview these other suspects, I’m willing to do it. With Chris’s and Shari’s help, Sister Carm’s counsel, and God’s guidance, I should be able to muddle through . . . Shouldn’t I?

You can read more about Sister Lou in Mayhem & Mass, the first book in the NEW “Sister Lou” mystery series.

A Los Angeles transplant, Sister Louise “Lou” LaSalle feels right at home in Briar Coast, New York. After all, her beloved nephew, Chris, works at the college founded by her congregation. But while Sister Lou has always played by the rules, she’s about to have her faith in herself tested—by murder…

Sister Lou expects some pushback when she invites her friend, Maurice Jordan, to be the guest speaker for the St. Hermione of Ephesus Feast Day presentation. The theology professor is known far and wide for his controversial views. What she’s not prepared for is finding him dead in his hotel room, bashed over the head.

When the local deputies focus on the members of her congregation as suspects, Sister Lou takes matters into her own hands. Against Chris’s wishes, she teams up with a cynical local reporter to delve into Maurice’s life. The unlikely partners in crime-fighting uncover a litany of both devotees and detractors. And though it might take a miracle to find the killer, Sister Lou vows to carry on until justice prevails . . .

Meet the author
Olivia Matthews is the cozy mystery pseudonym of award-winning author Patricia Sargeant. A voracious reader, Patricia first realized she wanted to be a published author at the age of nine. She’s been inspired by writers such as Walter Mosley, Dick Francis and Tami Hoag, who put ordinary people in extraordinary situations and have them find the Hero Inside. Her Sister Lou character was inspired by Catholic sisters whose courage, determination and faith have helped build communities and formed rich, lasting legacies. Raised in New York City, Patricia lives in Ohio with her husband. She loves to hear from readers. You can reach her at BooksByPatricia@yahoo.com. Learn more at her website, authoroliviamatthews.com.

Like Loading...
This entry was posted in A DAY IN THE LIFE and tagged cozy mystery, Kensington Books, Olivia Matthews. Bookmark the permalink.