When I arrived in Granford, Massachusetts, I was ready to turn around and run after a week. My mother wanted me to fix up and sell a family home she’d inherited, that I’d seen only once in my life. It was the middle of a New England winter, and it was cold and damp (both inside and outside the house). The problem was, I’d lost my job and given up my Boston apartment, and I really had nowhere to go.

That was before my ex-boyfriend was found dead in the septic tank in my yard. And then I disrupted a town meeting to get at the truth of how he died. Heck of a way to introduce myself in a new town. 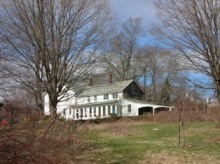 What a difference a couple of years can make! I’ve just married the “boy next door,” Seth Chapin, who literally lives next door, as his family has done for centuries. He was the one who found that body I mentioned. He really didn’t like me much when we first met. Well, that changed.

I needed a job, and I kind of knew there were apple trees on the property where I was staying (it took me a while to think of the place as “mine”), and it definitely didn’t occur to me that I could make a living from those spindly bare trees. Wrong again: Now I manage (with some skilled help) an orchard and sell my crop, and I’ve even expanded it to include more heirloom varieties. I even helped create a new and much-needed restaurant in the center of town, featuring local produce.

And I’ve solved more than one murder. I really didn’t see that coming—but who would? I don’t go looking for murder, and I don’t pretend I have any knowledge or expertise that applies, but somehow I keep getting pulled in. Don’t blame Seth, because one of those murders happened in my parents’ back yard in New Jersey.

Sadly, the latest victim was Monica Whitman, a nice, friendly older woman who retired to Granford with her husband. She threw herself into town activities and made friends quickly—and then she died suddenly and unexpectedly. Did I tell myself, “oh, I must go investigate?” No, of course not. I simply offered her husband my sympathy and asked if he needed help, and things got more complicated from there. The fact that the local police chief is a friend to both Seth and me is purely coincidental.

But I’m not a busybody or a know-it-all. I’m simply a member of the Granford community, by marriage and by choice. If something goes wrong in the town—and murder is the biggest wrong I can think of—I want to see it put right, and mostly I’ve been able to help. That’s what being part of a community means, and Granford is my home now.

You can read more about Meg in A Late Frost, the 11th book in the “Orchard” mystery series.

The usually quiet town of Granford, Massachusetts, is even drowsier during the colder months. But this year it’s in for a jolt when Monica Whitman moves into town. She’s a dynamo who wants to make friends fast in her new home, and she throws herself into community activities. Meg Corey, now Chapin after her marriage to Seth Chapin, is intrigued by the new arrival, who has already sold the town board on a new, fun way to bring in visitors during the off-season: WinterFare, which will feature local foods (such as Meg’s apples) and crafts, as well as entertainment.

Tragically, Monica falls ill and dies after the event in what looks like a case of food poisoning. When all the food served at WinterFare has been tested, including Meg’s apples, it becomes clear that there’s a more sinister explanation to the older woman’s sudden demise.

Meg’s investigation uncovers a bushel of potential suspects, one of whom is rotten to the core.

Giveaway: Leave a comment below for your chance to win a print copy of A Late Frost. U.S. entries only, please. The giveaway ends November 18, 2017. Good luck everyone!

About the author
Sheila Connolly, Anthony and Agatha Award–nominated and New York Times bestselling author, writes mystery series set in Philadelphia (the Museum Mysteries), rural Massachusetts (the Orchard Mysteries), and Ireland (the County Cork Mysteries), as well as a paranormal romance series (the Relatively Dead series). She will introduce a new Victorian Village series set in Maryland in 2018. In addition, her short stories have appeared in multiple anthologies. Formerly a professional genealogist, she currently lives in Massachusetts, surrounded by many, many departed ancestors, with her husband and three cats, and owns a cottage in West Cork in Ireland, where her father’s family came from.

Like Loading...
This entry was posted in A DAY IN THE LIFE and tagged cozy mystery, Penguin Random House, Sheila Connolly. Bookmark the permalink.