Bouchercon is the world’s finest annual crime fiction event, bringing together more than 1,500 authors, fans, publishers, reviewers, booksellers, editors, and every other part of the community for a fantastic four-day event.

Tuesday, October 10, 2017
Arrived in Toronto and checked into my room. Got a nice view of the CN Tower. Went to the bank and got some Canadian money. Had lunch in the Food Court under the hotel – Chinese. Then did my volunteering gig – working the registration desk. Ann from Oz and I took a cab ($15 CAD) to Eva’s Original Chimneys (454 Bloor St W) and tried their hand-made ice cream cone – I had the typical vanilla/chocolate twist with rainbow sprinkles on the cinnamon coated cone. Yummy. To prevent the ice cream from falling through the bottom, they put a chocolate truffle as the base.

We decided we would brave their subway system, which is so cool. We couldn’t just buy a one-way ticket, so we paid $20 for their reloaded card and darn if we couldn’t figure out how to pay for our fare. It was fun taking their subway – although, we couldn’t figure out if we got off the correct stop because we were looking for a particular word – but with help from a train rider we were on our way. The funny thing is we kept saying what is “M” and then we look up on the door and it told us.

Then we went to the park across the street from hotel and enjoyed the TORONTO sign that changes colors three times. For some reason, I couldn’t get the colors in my picture, but it did reflect on the ground. Then I ran into my friends and spent the rest of the evening in the lobby hanging with my friends.

view from my hotel room

Wednesday, October 10, 2017
Had an early breakfast at hotel and then Ovidia and I went to Dundas Square / Eaton Centre to take the hop on and hop off bus tour, only we plan to stay hop on and besides the weather was dismal with rain and a damp day. We saw Casa Loma, Bata Shoe Museum, China Town, CN Tower, Hockey Hall of Fame, St. Lawrence Market and the Distillery District. Then we decided to walk back to the hotel from within the Eaton Centre mall and the walk wasn’t that bad, since when we came out of the underground mall, we were right next to the clock building. Later I had a pre-convention board meeting and after, there was more hanging out with friends.

Departure (First) stop on Hop On Hop Off Tour

Royal Ontario Museum (merging the old with the new)

Windows painted on side of building 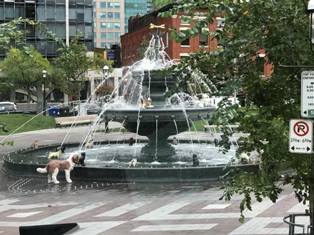 Dog park (they are statues)

Thursday, October 14, 2017
Met Judy, Kristopher, Michael, Ann from Oz and Kris’ friend Erin LaBonte-Mckay for breakfast at Tim Horton’s. After, they went to the Speed Dating Event and I went to the panel that I was on: Bouchercon 101. On the panel were Jeff Siger, Ruth Gordon, Erin Mitchell, Mike Bursaw, Dru Ann Love and Helen Nelson. We had to tell a story and for the life of me, I could not remember Sue Grafton’s name so instead I said “you know the Y-Lady, the one who writes the alphabet book.” And everyone knew who I was talking about and then the other panelists talked about their encounter with the “Y-Lady.” It was funny. 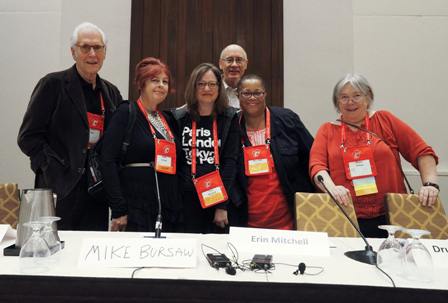 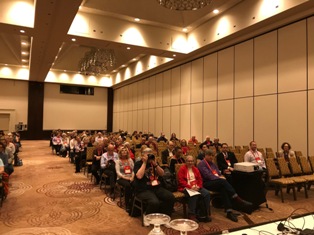 Then went to the Kensington gathering where I saw a plentitude of authors (Gave a big hug to Laura Bradford) and picked up two books from new upcoming series. A group of us (Judy, Susie and Risa) went to SOMA Chocolatemaker in the Distillery District for a chocolate tasting, where I braved sampling the three different types of dark chocolate and yes, they had one milk chocolate sample). We also got to taste pure chocolate nibs and chocolate dust (that’s what I’m calling it. It which was very informative. For dinner, another group (Susan Elia MacNeal, Judy Bobalick, Erin Mitchell, Susan Vasli) went to Maezo Restaurant– an Indian restaurant where we and shared five dishes. Everything was delicious. Then onto the Opening Ceremony and then the HarperCollins reception.

Friday, October 13, 2017
As part of my Bouchercon tradition, I had breakfast with Rae James who writes the fabulous “Hollis Morgan” series. Then it was off to a few panels where I was waylaid and missed a few panels chatting with friends along the way. Then there was the GMM board meeting where we voted four new members on the board. Next up was the Librarian’s Tea where an unexpected event happened – – the fire alarm went off and like the person she is, Hank Phillippi Ryan held court with great aplomb, even incorporating the fire alarm in her talk. Interesting note was the fire alarm had a nice melody as it rang throughout the evening. Had dinner with Matthew, the former English Teacher, Eric and Aimee at BNB (Burgers & Bistro) restaurant where I had once again, the Chorizo Rigatoni. Yum, Yum. The evening closed with the Pub Quiz, hosted by the Crime Writers of Canada, which was a barrel of fun. Our team lost with a score of 13 points, but we had a good time. 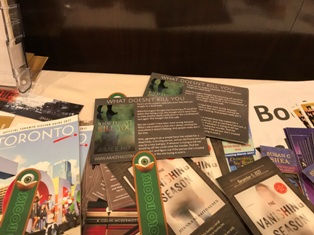 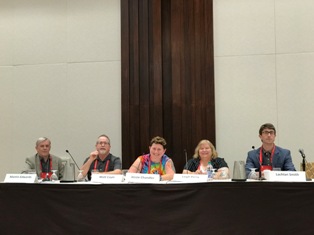 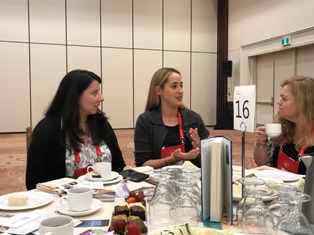 The Librarian’s Tea with Ausma Zehanat Khan and Nadine Nettmann

Saturday, October 14, 2017
The day started with the Sisters in Crime breakfast where Diane Vallere gave her last speech as President. New President is Kendel Lynn. 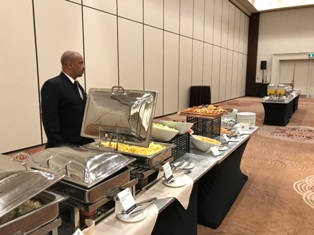 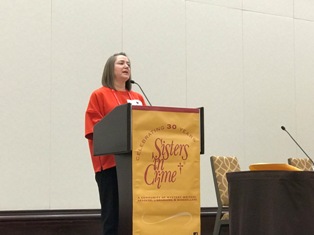 Then it was the day I have been waiting for. A group of us (Art, Judy, Rae, Janet, Susie, Alice, John, Eric, Aimee, Ovidia, and I) went to the Fairmont Royal York Hotel for an Afternoon Tea event. To get there, we traverse through the underground and oh what a lovely walk it was as we consulted various maps to get us there on time. The Library Room where the tea was held was picture perfect, although one of the picture on the wall was slight skewed. The tea was perfect. I selected the Jasmine tea which was heavenly as was the traditional finger sandwiches and their selection of pastries. Because my friend Eleanor couldn’t attend, I was sending her pictures of so that she can join us vicariously. After tea, a few of use trekked back to hotel underground while another went topside. 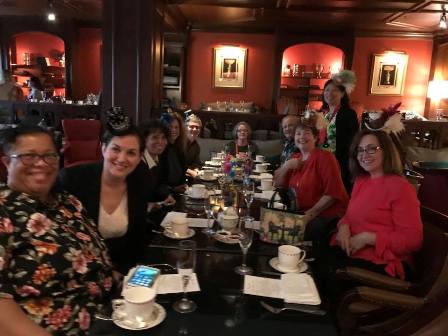 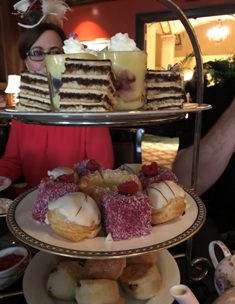 While at the hotel, I get a message from my New York friend, Judi, telling me she is also in Toronto and we agreed to meet up for a few minutes in the hotel lobby. Next up Judy, Kristopher and I walked in the rain to the Minotaur reception that was held in the La La Club and then to the Seventh Street reception that was held in the Ben McNally Book Store. The evening closed with dinner with Kristopher, Nikki and I at Shopsy’s Deli Restaurant. 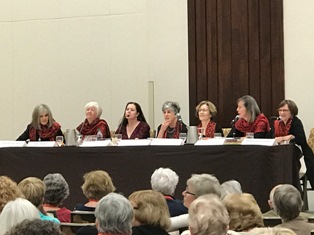 Sunday, October 15, 2017
My last day with the crime fiction tribe. Of course, at 4 in the morning, there was a loud argument outside my door (drunken guests) and soon I heard banging on the doors (not my door). I heard later that security was called. On the agenda, was brunch and the Anthony’s Award. After a few goodbyes, it was time to leave where I encountered a 3-hour delay due to air traffic. Finally arrived home at 11:30 and crashed.

last view of the CN Tower from my room 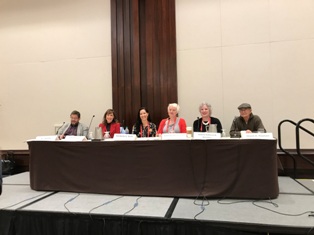 After a 3-hour delay, finally taking off.

Looking forward to next year’s Bouchercon which is being held in St. Petersburg, Florida.