Kiki Lowenstein and the Sour Note by Joanna Campbell Slan 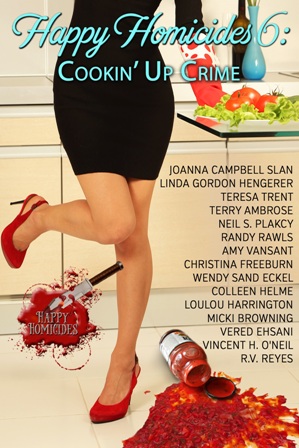 After six weeks of teaching various Zentangle patterns, or “tangles” as they’re called, I’d gotten a pretty good idea which of my students exceled and which ones were struggling. My name is Kiki Lowenstein; I own a scrapbook and crafts store. My job is to encourage every student, no matter what the finished product looks like. This particular week, I’d taught a challenging tangle, a basket-weave design. I’d purposely saved this pattern for last, because it takes a lot of concentration. As usual, we’d done the design on a tile, a small square of high quality paper that’s ideal for Zentangle purposes. Not surprisingly, the results were mixed. My star student, Darcy Rosenblatt, caught on right away. So did Vanessa Johnson, a long-time customer. The rest of my students worked diligently, struggling to master the complex design. I spent an inordinate amount of time with Lydia Connelly, who was the class problem child. She had been honest when she had told me, “I can’t draw a straight line.” To my horror, I discovered she couldn’t even draw a straight line with the help of a ruler. Bless her heart, she made up for finesse in pure enthusiasm.

Darcy and Vanessa not only executed the new pattern perfectly, they went ahead and shaded their tangles in such a way that they looked three dimensional. Both women were way ahead of their classmates.

“Since this is the last class in our Level One session,” I said, “I’d like to take pictures of your work. Please spread all your tiles on this work table. While I take photos, you can help yourselves to the goodies on our food table.”

“How’s life with your grandson?” I asked Vanessa, after I’d finished with my picture taking.

“Izzy is a sweet young man, but Lord love him, he has the attention span of a gnat. Left his cello at music school, and he has a concert coming up that he needs to practice for.” Vanessa shook her head. She was a commanding figure, a big dark-skinned woman in cornrow braids. Her soft brown eyes always drew me in because they radiated warmth and friendship. “I need to teach that boy a lesson,” she added.

I chuckled at that.

After a clap of my hands to get their attention, I announced, “I’ve finished taking my photos. You are welcome to pick up your tiles and take them home. Thank you all for coming and don’t forget to sign up for our Level Two session.”

No one was in a hurry to leave. Instead, we chatted with each other as we munched on nachos and cheese, mock Margaritas, and chicken quesadillas. I love watching my students build friendships and support networks. Closer to nine p.m., people migrated away from the food and toward the work table. While they gathered their tiles, I opened Tupperware containers and filled them with leftovers. I’d no sooner snapped the lid on a plastic tub when Darcy shrieked. “They’re gone! All gone! My tiles have disappeared!”

Of course, I’ve had problems crop up while teaching, but this was a new one. Generally, people feel proud of their work. At the very least, they feel possessive. Why on earth would someone steal another person’s art? The pieces had to be misplaced.

I fisted my hips. “Okay, everybody. Start looking around. No one leaves until we find Darcy’s tiles.”

There was a general flurry of activity. Students turned their purses and satchels inside out. I crawled under the tables and searched. Finally, one conclusion was obvious: The only person who had resisted opening her handbag was Lydia.

“Lydia?” I asked gently. “Please go through your things.” With tearful eyes, she reached deep into her purse and withdrew all six of Darcy’s tiles. Lydia couldn’t meet Darcy’s eyes as she pushed the stack across the table toward their owner. A mumbled, “Sorry,” accompanied the artwork.

“What on earth made you do that?” Darcy’s face flamed red with anger. She was a short, stout woman with wide hips, and a face like a bulldog. Her art was a point of pride.

Tears spilled down Lydia’s face. I handed her a tissue. Her voice broke as she said, “Harvey keeps saying I’m no good at this. He won’t let me take any more classes. I thought if I showed him your work, Darcy, he’d think I improved. It was a dumb idea to take your tiles, but it was the best I could come up with.”

Vanessa shook her head. “You mean to tell me that man of yours controls what you do for fun?”

“Harvey’s in charge of our budget. He says it’s obvious that Zentangle lessons are wasted on me.”

That churned my stomach. The rest of the group asked Lydia questions like, “Has he always been this way?” and “Are you having money troubles?”

In minutes, we learned that Harvey was always controlling to a degree, but as a former high school football coach, he was also a big believer in mastery. “He took golf lessons from an expensive pro for three years to get his handicap down to the single digits. He attended a top-notch tennis academy so he could get to the top of the charts in the local Y. It’s not that he doesn’t want me to have a hobby. It’s just that he thinks it should be something I’m good at.”

“Do you enjoy doing Zentangle?” I asked.

“Then this is really just about the money.” Vanessa crossed her arms over her chest. “You need to convince him it’s worth the small amount you spend to take classes.”

That’s when I got an idea, one that could solve problems for both Vanessa and Lydia. “Vanessa, why don’t you loan Lydia that cello Izzy keeps forgetting? Lydia, when you get home tonight, show Harvey the cello and tell him that instead of taking Zentangle classes, you’ve signed up to buy the cello on a payment plan. Say it’s a Stradivarius. Tell him you’re going to take lessons from a teacher who’s with the St. Louis Symphony. Come up with a big number as your tuition.”

Vanessa and Lydia exchanged amused glances. Vanessa shrugged. “Sounds like a plan. You in, Lydia?”

Sure enough, when the next week rolled around, I gave Lydia a call. “I’m hoping I’ll see you for our next Zentangle session.”

“Absolutely!” She laughed. “I did exactly as you suggested, Kiki. Once Harvey got a good look at the cost of me learning to master the cello, he nearly fainted. Then I gave him a choice: cello or Zentangle. You know exactly what he chose. Isn’t that funny? Izzy’s cello hit a sour note—and I never even took it out of the case!”

You can read more in Cookin’ Up Crime, the sixth book in the “Happy Homicides” anthology series.

Our biggest collection of seasonal cozy (traditional and clean) mysteries yet! Fifteen award-winning, multi-published, and bestselling authors share food fantasies with a fatal twist. And as always, the book comes with a special code so you can email for a FREE bonus file with recipes and craft ideas that go along with the stories. Included are Kiki Lowenstein and the Smoothie Operator by Joanna Campbell Slan; Dying for Spiced Tea: A Beach Tea Shop Short Story by Linda Gordon Hengerer; A Gift for Gus: A Pecan Bayou Mystery by Teresa Trent; Recipe For Murder: A Seaside Cove Bed & Breakfast Mystery by Terry Ambrose; Nectar of the Dogs: A Golden Mystery by Neil S. Plakcy; Irish Texas Chili Story: A Jonathan Boykin Short Story by Randy Rawls; Dot Didn’t Do it: A Pineapple Port Mini Mystery by Amy Vansant; Simmer to Death by Christina Freeburn; Food for Thought: A Rosalie Hart Mystery by Wendy Sand Eckel; Catering to Murder: A Shelby Nichols Adventure by Colleen Helme; Murder, Moonlight, and Muffins: A Myrtle Grove Garden Club Short Mystery by Loulou Harrington; F is for Fruitcake by Micki Browning; A Death in Customs: The Cozy Tea Shoppe Mystery Series by Vered Ehsani; Silent Harmonies by Vincent H. O’Neil; and Fish Fried by R. V. Reyes.

About the author
Joanna Campbell Slan is the award-winning and national bestselling author of three mystery series. The first book in this series—Paper, Scissors, Death–was a finalist for the Agatha Award. There are now thirteen books and nearly 30 short stories detailing Kiki’s life. Learn more at joannacampbellslan.com

Get Love, Die, Neighbor: The Prequel to the Kiki Lowenstein Mystery Series absolutely free by going to BookHip.com/QJXAHT.

Like Loading...
This entry was posted in A DAY IN THE LIFE and tagged anthology, Joanna Campbell Slan, Spot On Publishing. Bookmark the permalink.