A day in the life of Blake Harper by Neila Young 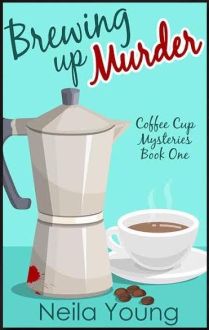 Blake Harper jolted as she turned on the standing mixer.

In the kitchen of Mystery Cup Café, Blake took a step toward the back door that led out to the alley behind the building. She reached to disarm the security alarm and stopped herself. Nope. Not gonna do it.

She was just imagining things. Rolling her shoulders, she took a deep breath and looked around the large kitchen. Coffee beans lined three of the big metal shelves that took up the back wall, causing the scent of fresh coffee to waft around her.

Blake walked back over to the industrial island and glanced in the mixer to see that the butter looked sufficiently creamed—the first step in making a batch of brownies for the morning crowd of chocolate-seekers at Mystery Cup.

With a shaky breath, she reached for an egg. It was no wonder she was a bit jumpy after her barista was murdered in the café. In fact, coming in at six o’clock in the morning probably wasn’t the best idea she’d ever had. But sitting at home certainly hadn’t been helping her anxiety. Even her cat Ninja had flicked his tail and given her a grumble-purr of derision.

The best way Blake knew how to distract herself was through coffee and baking. She cracked an egg in the chrome bowl of her heavy-duty mixer then measured in the sugar before taking a deep whiff of the chocolate chips and chocolate-covered espresso beans she’d already measured out. Chocolate. Mmmm.

Her sister, Kyle’s, voice came over the line. “You’re at work, aren’t you? I knew I saw the light on when I came into the police station this morning.”

Her baby sister Kyle was under the impression that she could boss Blake around. Of course, the fact that she was Wilton, Missouri’s lead police detective might have had something to do with that.

“I have a lot of catching up to do.” Blake hit speaker and set her phone on the counter as she continued to beat the eggs into the sugar and butter mixture. “People are going to be packing it in for my new monthly recipe.”

Kyle snorted. “Yeah, you mean they’ll be packing it in, trying to get the best piece of gossip.”

“Well, what do you expect?” Blake grabbed a teaspoon and measured in pure vanilla extract. “The first murder in this town since the Wilton Strangler almost fifty years ago, and it happened here.”

Kyle sighed. “I guess I should be happy you’re working and not out trying to investigate the murder.”

Blake winced, glad her sister couldn’t see her draw her lip between her teeth.

“Psh, course not.” Yeah, that sounded totally lame, even to her own ears.

She could visualize her sister’s nostrils flaring as she spoke. “Omigod, do not—I repeat—do NOT go looking for trouble.”

“Finds you?” her sister scoffed. “Please, trouble runs you down in its car. I’m surprised you don’t have tire tracks on your back.”

Blake stuck her tongue out at the phone.

Her eyes widened. “You did not!”

Her sister’s chuckle rumbled over the phone. “No, but I know you too well. Look, I gotta go. Chief called an early meeting. I’ll check up with you later. And seriously, Blake, all I want you to think about today is which one of those hotties you’re going to let ask you out.”

The line clicked off, and Blake sighed. On top of the murder, she did have two men to think about—Sean, the mysterious mountain of muscles who owned Macabre Reads; and Adam, the hot doctor her sister-in-law was trying to set her up with.

Her body tensed when she heard that same sound again coming from outside. What on earth?

Somebody was out there. And no one should have been in the alley behind the café at six in the morning. Blake firmed her spine and set her spatula down then brushed her hands on her red apron.

Kyle’s voice telling her to stay out of trouble echoed in Blake’s head. But it was just a noise outside. How much trouble could she get into investigating a noise?

The buttons on the alarm beeped as Blake punched in the code to disarm it. As soon as the little light turned green, she reached to open the door. . .

You can read more about Blake in Brewing Up Murder, the first book in the NEW “Coffee Cup” mystery series.

As the owner of Mystery Cup Café in Wilton, Missouri, a town made famous by a string of long-ago murders, Blake Harper is used to the mysterious. When her barista is found strangled in a mound of coffee beans, Blake vows to find the killer, even though her sister, the town’s lead police detective, tells her to stay out of it.

Blake finds plenty of suspects, like the owners of a rival coffee shop and the handsome new bookstore owner. But when new threats are made, she soon realizes the danger is centered around Mystery Cup and someone is targeting her personally.

Will Blake be able to solve the murder, find a new barista, and perfect her recipe for espresso brownies before she becomes the next victim?

Meet the author
Neila Young is a Midwestern girl and a lover of coffee, live music, and horror movies, not necessarily in that order.

Writing (and reading) mysteries are Neila’s passion, and she approaches each day by thinking, “everything is a story.” She has been writing all her life and can’t remember a time when she wanted to do anything else. She loves to take notes and spin tales about the quirky characters she meets, and she has found that she can create some great stories by asking “what if” and “suppose that. . .”

Neila studied journalism at the University of Kansas then spent many years suffering the trials of corporate America, writing about everything from financial risk management to software user manuals to website copy about radiators (sadly, that’s not a joke). She finally decided to take the plunge and write the cozy mysteries she loves so much, complete with recipes!

When Neila is not writing, she’s probably hanging out at a coffee shop or fighting evil with the help of her very supportive husband, two awesome children, who constantly ask to have characters named after them, and the most lovable dog in the world, Dizzy.

Like Loading...
This entry was posted in A DAY IN THE LIFE and tagged cozy mystery, Neila Young, Red Adept Publishing LLC. Bookmark the permalink.