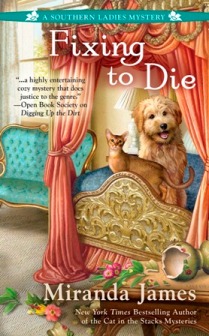 When you live in a house like Riverhill, occupied by your family for going on two hundred years, you have to accept the fact that people have died in the house. Most of them died of natural causes, but there could be one or two who were helped along the way to that white light. There’s no way to know for sure, and those who went unwillingly might try to linger in some form.

My sister Dickce and I have observed odd things over the many decades of our lives at Riverhill. The occasional inexplicable cold spot in the house, a door that doesn’t like to stay closed, small objects discovered in places they don’t normally reside. Nothing frightening – just odd. If you ask me whether I think Riverhill is haunted, I’d laugh and say it isn’t.

I don’t know what your definition of haunted is, but mine would include malicious spirits – if I really believed in ghosts. I tend to believe that there is usually a human hand behind most allegedly ghostly occurrences. For example, I wouldn’t put it past my sister to be the one sneaking around the house, moving things, and then claiming that she isn’t responsible.

Now, however, Dickce and I are responding to a plea from Mary Turner Catlin, granddaughter of an old friend, to figure out the source of weird goings-on in her home in Natchez. Mary Turner and her husband, Henry Howard Catlin, operate Cliffwood as a bed-and-breakfast. Mary Turner thinks there’s a ghost loose at Cliffwood, and she’s afraid if word gets out, they’ll lose business. They can’t afford to lose business, because they might lose the house that has belonged to her family for generations.

I have no doubt that the troubles are caused by human hands, but the question of course is, who is behind this? Dickce and I, along with our ward, Benjy Stephens, and our two pets, Peanut the labradoodle and Endora the Abyssinian, will be heading to Natchez to sort out the problem. I enjoy a challenge, but figuring out the motive for these shenanigans, how they are done, and who is responsible shouldn’t really be all that tough.

You can read more about Miss An’gel in Fixing To Die, the fourth book in the “Southern Ladies” mystery series.

It’s autumn down south, and An’gel and Dickce Ducote are in Natchez, Mississippi, at the request of Mary Turner Catlin, the granddaughter of an old friend. Mary and her husband, Henry Howard, live in Cliffwood, one of the beautiful antebellum homes for which Natchez is famous.

Odd things have been happening in the house for years, and the French Room in particular has become the focal point for spooky sensations. The Ducotes suspect the ghostly goings-on are caused by the living, but when a relative of the Catlins is found dead in the room, An’gel and Dickce must sift through a haunted family history to catch a killer.

Giveaway: Leave a comment below for your chance to win a print copy of Fixing To Die. U.S. entries only, please. The giveaway ends October 7, 2017. Good luck everyone!

About the author
Miranda James grew up in Mississippi on a farm but sadly, the house wasn’t an antebellum mansion. Mysteries set in old houses have always intrigued Miranda, and the books in the Southern Ladies series are all linked to antebellum houses. In addition to this series, Miranda also writes the best-selling “Cat in the Stacks” series featuring librarian Charlie Harris and his Maine Coon cat, Diesel. Their latest adventure, Claws for Concern, will be out in February 2018.

Like Loading...
This entry was posted in A DAY IN THE LIFE and tagged cozy mystery, Miranda James, Penguin Random House. Bookmark the permalink.