My Musing ~ Dead In The Water by Denise Swanson

Dead in the Water by Denise Swanson is the first book in the NEW “Welcome Back to Scumble River” mystery series. Publisher: Sourcebooks Landmark, coming September 5, 2017 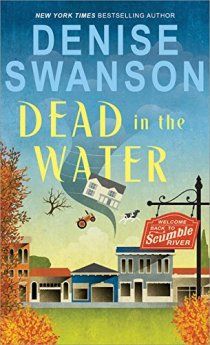 A twister, a kidnapping, and a murder—oh my! Scumble River may never be the same.

For school psychologist Skye Denison, there’s certainly no place like home. When a violent tornado devastates her small hometown of Scumble River, she can’t see how the community will ever recover—especially since town councilman Zeke Lyons appears to have perished in the twister.

But things get even worse for Skye when her police chief husband, Wally, disappears in the midst of investigating Zeke’s death, and evidence arises pointing to foul play. Did Zeke really die in the storm, or was he murdered? And could Wally be next on the criminal’s hit list?

A tornado struck Scumble River and as the town tries to recover, a murder and a disappearance sets the stage for this homecoming of sorts for Skye, Wally and their friends. Everything old is new again as the author takes this series to 2017 and I’m so excited about all the new possibilities where this series can go.

From the first page to the exciting conclusion, this book immediately grabbed my attention, quickly becoming a page turner. The tornado, the destruction, the murder, and the missing Wally created a well-executed mystery that I could not put down. The action was non-stop with a nice pacing to keep me in tuned to all that was happening on the pages with the various scenarios and how they would all play out. Adding Carson to the mix provided some insight into his, Wally and Skye’s relationship and I rather like it. With the tornado as the backdrop, the author did a great job in keeping me intrigued as to who was the mysterious Tin (I had my suspicion) and who really murdered the councilman and why. I really enjoy watching how all the pieces came together but my biggest thrill was the aftermath involving Skye and Wally and what a momentous occasion that came to fruition. This was a great old-new-debut series and I can’t wait for the next book in this delightfully endearing series.

FTC Full Disclosure – I received a digital ARC of this book from the publisher via NetGalley.

Like Loading...
This entry was posted in Reviews and tagged cozy mystery, Denise Swanson, Sourcebooks Landmark. Bookmark the permalink.