My Musing ~ Death Warmed Over by Kate Flora

Death Warmed Over by Kate Flora is the eighth book in the “Thea Kozak” mystery series. Publisher: ePublishing Works!, August 2017 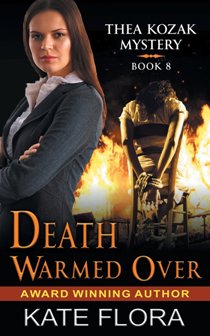 Arriving to view what will hopefully be her dream home, Thea Kozak finds her real estate agent, Ginger Stevens, tied to a chair, surrounded by fiery space heaters. Just before the woman dies, she utters the indistinct words: Bobby. So long. Safe. Sorry.

Then a stranger, claiming to be Ginger’s boyfriend, corners Thea, demanding a package that Ginger gave to her, a package Thea never received.

Determined to get justice for Ginger, Thea begins her own investigation. Ginger’s colleagues know little about her, her apartment has been professionally sanitized, Ginger Stevens is the name of a child who died many years ago, and the Maine police have no idea who real-estate agent Ginger Stevens really is.

But Thea is sure the two men following her know Ginger’s true identity, and will stop at nothing to keep her from uncovering the truth behind the woman’s dying words.

When Thea discovers the nearly dead body of her realtor, the emotion entanglement envelopes her and her only recourse is to try to find the person responsible for the heinous act.

This fast-paced and grippingly engaging drama pulled me in immediately, quickly becoming a page-turner as I could not put this book down until it was all said and done. The author does a great job with the visually descriptive narrative creating a film-like scenario that I could see and follow along with the dialogue. The mystery was pulsating with enough intrigue and suspense that I had to know what was going to happen next. The constant flow of information provided, kept me delving into the various challenges Thea faced as each clue disseminated in a manner with a few twists and turns that enhanced the telling of this tale. I’m so happy that Thea is back in a drama tinged in trepidation that enraptured me from beginning to a finale befitting Thea. I can’t wait to read the next book in this terrific series.

Like Loading...
This entry was posted in Reviews and tagged ePublishing Works!, Kate Flora, suspense. Bookmark the permalink.

6 responses to “My Musing ~ Death Warmed Over by Kate Flora”