A conversation with Diane Joyner as told by Bruce Robert Coffin 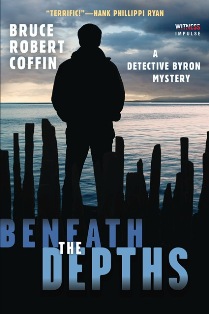 My name is Diane Joyner and I am a Portland police homicide detective. I’m originally from New York City where I also worked homicides. I moved to Maine to escape my personal troubles and start anew. For the last several years my partner on murder cases has been Detective Sergeant John Byron. You may have guessed by his title that a John is also my supervisor. There is a mutual attraction between us which has led to some trouble, in that the PD has strict rules about getting romantically involved with a coworker in the same unit, specifically one’s own supervisor. We’ve been forced to try and keep our involvement a secret from our peers, although I think some of them are starting to suspect.

My interest in John Byron is easy enough to understand. He’s tall, handsome, and very smart. And he’s a cop’s cop. A second-generation badge who hates to lose. John and I are similar in our dogged pursuit of truth and justice for the victims. We work very well together, playing off each other’s strengths to close cases.

Our relationship has its challenges, though. John’s marriage of twenty years recently ended and I think he is conflicted about his feelings. Even our respective backgrounds have become an issue. You see I am an African American from the Big Apple, while John, who is ten years my senior, was raised Irish Catholic right here in Portland, Maine. He is also struggling with the bottle. And if I’m being totally honest with you, I may have a few demons of my own. Ultimately, I don’t know what will become of John and me but I’m willing to give it a shot and find out.

Well, I’ve gotta run. I’m heading to Augusta to meet John at an autopsy. We just pulled a dead attorney out of Casco Bay. Great talking with you.

You can read more about Diane Joyner and John Byron in the second book of the Detective Byron Mysteries, Beneath the Depths.

In this latest gripping mystery from bestselling author Bruce Robert Coffin, Detective Sergeant John Byron is back—and ready to prove that no one on his beat is above the law.

When the body of prominent Portland attorney Paul Ramsey turns up in the bottom of Casco Bay, following his loss of a multimillion dollar civil trial, Byron knows it’s no accidental drowning. Golden boy Ramsey had a dark side—and Byron believes the key to solving his murder lies in uncovering those secrets someone wanted buried along with him.

With the brilliant Detective Diane Joyner by his side, Byron takes on Ramsey’s former employer, the powerhouse law firm of Newman, Branch & DeWitt. But delving further into the troubled waters of Ramsey’s past only serves to lengthen the list of suspects—unleashing a perfect storm of corruption, betrayal, and murder that only Byron can stop. If he’s not too late.

Giveaway: Leave a comment below for your chance to win a digital copy (Kindle or Nook) of Beneath the Depths. The giveaway will end August 14, 2017. Good luck everyone!

Meet the author
Bruce Robert Coffin is a former detective sergeant with more than twenty-seven years in law enforcement. At the time of his retirement, from the Portland, Maine police department, he supervised all homicide and violent crime investigations for Maine’s largest city. Following the terror attacks of September 11th, Bruce spent four years working counter-terrorism with the FBI, earning the Director’s Award, the highest honor a non-agent can receive.

Bruce is the bestselling author of the Detective Byron Mysteries from HarperCollins. The debut novel in the series, Among the Shadows, was released to rave reviews, appearing in several Amazon bestseller lists and topping the paperback fiction list in the Maine Sunday Telegram. His short stories have been featured in several anthologies including the 2016 Best American Mystery Stories.

Like Loading...
This entry was posted in A DAY IN THE LIFE and tagged Bruce Robert Coffin, HarperCollins, police procedurals, Witness Impulse. Bookmark the permalink.