A day in the life with Dayna Anderson by Kellye Garrett 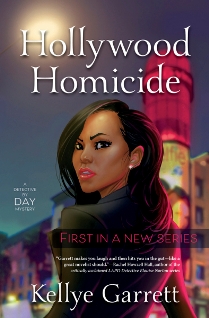 My name is Dayna Anderson and I used to be famous. But unlike Cinderella and Snow White, my fairy tale didn’t end with happily ever after. Instead, it came crashing down a year and a half ago, and I joined the rest of the mere mortals.

Having had fleeting fame, I’m not recognizable as much as familiar. They just can’t figure out how they know me, so they assume it’s from home. I’ve been from places like Seattle, Omaha, and in one case Wasilla, Alaska. I’ve always said there is at least one black person everywhere. Folks all seem to think that lone integrationist is me.

The familiarity is courtesy of the Chubby’s Chicken chain. For almost two years, I somehow ended every situation—and commercial—with the catch phrase “Don’t think so, boo.” Eighteen months ago, Chubby’s abruptly ended my contract with the all-too-standard “we’re going in a new direction” spiel to my now-former agent. I was fine with it—at first. I just knew there was more in my future than just chicken wings.

I was wrong. Dead wrong. So wrong that I am officially unofficially retired from acting. I’m also officially broke, which especially sucks because my parents’ house is going into foreclosure. It’s not like I’m not looking for a job. I am. I just can’t get hired—not even as a bikini barista.

That’s the only reason I got involved in all of this, I swear. To help Mama and Daddy. I was running out of options. There aren’t too many job opportunities for someone whose only skill is the ability to juggle while speaking in a German accent.

So when I drove past that hit-and-run and saw that LAPD billboard offering a $15,000 for information on the accident, I figured I had two choices: get the reward or become a stripper. And I don’t possess nearly enough inner thigh strength needed to properly work a pole.

Plus, it’s not like I’m trying to solve murder. I’m just trying to remember the car so I can give a description to the police and help them solve it. I’m pretty sure I saw the car that hit Haley Joseph. Problem is I can’t remember what the dang thing looks like. Not that I’m willing to let that stop me from getting that reward money for my parents. I’ve even recruited my best friends Sienna and Emme to help but so far we aren’t having much luck.

Of course, this all would be easier if I wasn’t avoiding him—not so easy when your longtime crush is now Hollywood’s current It Boy and star of the new CBS hit LAPD 90036. I can’t look up without seeing him on a billboard or on my TV. He was there when we drove past the accident. But we haven’t spoken since that night Haley died and it’s all because of a slight misunderstanding involving his hand and my non-stripper-worthy thigh. My friends aren’t even allowed to mutter his name. He’s like Voldemort, except with a nose.

So now I’m doing everything I can to remember the car. Heading back to the crime scene. Talking to witnesses. I even tried hypnosis. I’m determined to get this reward.

I mean, what’s the worst that can happen? Right?

But just as a safety net, maybe I should sign up for the clinical trial that hangs you upside down for two straight hours.

You can read more about Dayna in Hollywood Homicide, the first book in the NEW “Detective by Day” mystery series.

Dayna Anderson doesn’t set out to solve a murder. All the semi-famous, mega-broke black actress wants is to help her parents keep their house. After witnessing a deadly hit-and-run, she figures pursuing the fifteen-grand reward isn’t the craziest thing a Hollywood actress has done for some cash.

But what starts as simply trying to remember a speeding car soon blossoms into a full-on investigation. As Dayna digs deeper into the victim’s life, she wants more than just reward money. She’s determined to find the poor woman’s killer too. When she connects the accident to a notorious Hollywood crime spree, Dayna chases down leads at paparazzi hot spots, celeb homes and movie premieres. She loves every second—until someone tries to kill her.

And there are no second takes in real life.

Giveaway: Leave a comment below for your chance to win a print copy of Hollywood Homicide. U.S. entries only, please. The giveaway ends August 10, 2017. Good luck everyone!

Meet the author
Kellye Garrett spent 8 years working in Hollywood, including a stint writing for the CBS drama Cold Case. People were always surprised to learn what she did for a living—probably because she seemed way too happy to be brainstorming ways to murder people. A former magazine editor, Kellye holds a B.S. in magazine writing from Florida A&M and an MFA in screenwriting from USC’s famed film school. Having moved back to her native New Jersey, she spends her mornings commuting to Manhattan for her job at a leading media company—while still happily brainstorming ways to commit murder. Her first novel, Hollywood Homicide, is released by Midnight Ink on August 8, 2017.

Connect with Kellye at kellyegarrett.com.

Like Loading...
This entry was posted in A DAY IN THE LIFE and tagged Kellye Garrett, Midnight Ink, traditional mystery. Bookmark the permalink.