I’m excited to reveal the cover for the second book in the “Maizie Albright Star Detective” mystery series from Past Perfect Press, coming October 17, 2017.

A word from Larissa. . .
While I was in Japan, Georgia became the number one place to film movies, leaping past California, New York, and Canada. And thanks to Pinewood Studios building their American headquarters a few miles from my home, my hometown has become a mini-Hollywood. I’ve returned to Peachtree City, Georgia, and now have hipsters in my Kroger and movie stars working out in the local gym (not that I would know on the last one, but my BFF saw Thor doing pushups on her way to Zumba). There’s something called Vitality Bowl next to the Kroger. It claims to only make healthy food. And the quaint (old and dirty) BBQ joint I loved has disappeared.

“Georgiawood.” This is what partly inspired my new series, another humorous mystery, but with a heroine who’s about 180 personality degrees different from my other series’ heroine, Cherry Tucker.

In the first book, 15 Minutes, ex-teen TV and reality star, Maizie Albright, returns home to Black Pine, Georgia, determined to start a new career as a private investigator, modeled after her childhood starring role in Julie Pinkerton: Teen Detective. For a license in Georgia, she needs training and there’s only one gumshoe in Black Pine: Wyatt Nash of Nash Security Solutions. He’s got a hard body, Paul Newman eyes, and no interest in having an ex-actress for an apprentice. Unbeknownst to Maizie, the reality show cast of All is Albright and her stage-monster manager also follows her to Georgia.

Maizie’s got a big learning curve to overcome—not only in private investigations but also in life as a non-celebrity—but an optimistic disposition, years of therapy, and donuts will help her become the independent thinker her manager always hoped she wouldn’t become.

Check after my excerpt for a way to win the first book in the Maizie Albright Star Detective series, 15 Minutes! I hope you enjoy it! 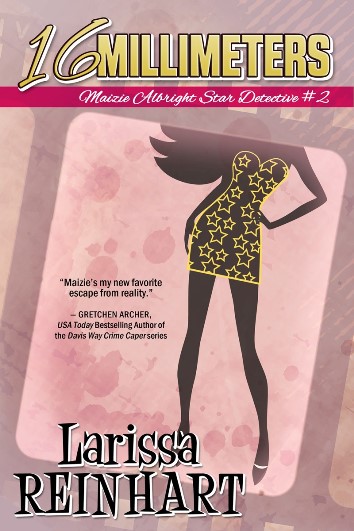 In continuing her career-makeover quest as a for-real detective, ex-teen and reality star Maizie Albright has a big learning curve to overcome. A sleuthing background starring in a TV show— Julia Pinkerton, Teen Detective—does not cut the real-life mustard. It doesn’t even buy her lunch, let alone extra condiments. Her chosen mentor, Wyatt Nash of Nash Security Solutions, is not a willing teacher. He’d rather stick Maizie with a safe desk job and handle the security solutioning himself. But Maizie’s got other plans to help Nash. First, win Nash’s trust. Second, his heart.

Wait, not his heart. His respect. His hearty respect.

So when a major movie producer needs a babysitter for his hot mess starlet, Maizie eagerly takes the job. But when her starlet appears dead, and then not dead, Maizie’s got more than an actress to watch and a missing corpse to find. Body doubles, dead bodies, and hot bodies abound when the big screen, small screen, and silent screams collide. Maizie’s on the job, on the skids, and on thin ice, hunting a killer who may be a celebrity stalker. And Maizie just might be the next celebrity who gets snuffed.

About the author
A 2015 Georgia Author of the Year Best Mystery finalist, Larissa writes the Cherry Tucker Mystery and the Maizie Albright Star Detective series. The first in the Cherry Tucker series, Portrait Of A Dead Guy (2012), is a 2012 Daphne du Maurier finalist, 2012 The Emily finalist, and 2011 Dixie Kane Memorial winner. The sixth mystery, A Composition In Murder was released November 15, 2016. The debut in the Maizie Albright Star Detective series, 15 Minutes was released January 24, 2017. Her family and Cairn Terrier, Biscuit, lived in Nagoya, Japan, but just moved back to Georgia. See them on HGTV’s House Hunters International “Living for the Weekend in Nagoya” episode.

Music continued to thump through the porch’s floorboards. I rang, then hammered on the door again, tried the knob, and wondered what Cambria was doing with videographer kits. Maybe they were doing pre-release documentary footage for marketing and the final DVD extras. Or she had another job before Leonard’s movie started. I tore off another lemon poppyseed hunk, popped it in my mouth, and thought about leaving. I glanced behind me to the long, long, long path back to the club. Wiggled my pained toes. Considered sitting on the porch to wait. With the basket of muffins. Noted the recent tightness of my jeans. Then traipsed to the right-side window to see what Cambria was doing.

Light gleamed between the curtains and shone on a California King with rumpled sheets and a spread that had half-slid off the bed. Satin-cased pillows had been piled in the middle. Other para-phernalia had been scattered across the sheets. My lemon poppyseed chewing slowed and I felt heat suffuse my cheeks.

I didn’t want to know what kind of filming Cambria had been doing. Or not doing. I backed away from the window, turned toward the stairs, and stopped.

The kind of filming Cam-Cam might have been doing was the exact kind of “shitting up his movie,” Leonard Shackleton had been talking about. Cambria could be blowing her chance for this epic part if she and her boyfriend were getting frisky in front of a camera. A professional camera, by the look of the kit.

Why in the hell would they make a “home movie” with what looked like the kind of camera a documentary director would carry? This wasn’t a GoPro box or a camcorder. My heart thudded and blood heated to shoot up the back of my neck.

Shizzles, Cambria was going to blow her shot and my shot and Nash’s shot all in one idiotic, depraved video.

Unless I stopped her.

I spun around and pounded on the door. After waiting another beat, I tromped off the porch and circled the villa to the bedroom side window. A slope made the window too high for easy peeking, but the blinds were up and no curtains barred the view. I tiptoed around to the back of the villa. At the far end, a screen door swung out to reveal a locked, windowed door leading to the tiny kitchenette. The bathroom window revealed nothing except Cambria had a crap ton of makeup.

I stepped away, and spied a pile of logs. Found a sturdy looking piece cut evenly on both ends, hefted it against my satin blouse, and walked back to the bedroom window. Dropped the heavy log, missing my toes by an inch, positioned it below the window, and attempted to pull the splinters from my off-the-shoulder ruffles. Gave up on the splinters and cursed Cambria for her stupidity and for ruining my Juan Carlos Obando. Climbed on the log, rose to my toes, and peered in the window.

Saw the body on the floor.

Giveaway: Have you ever had a TV show or movie film in your town? What was it like for your community? Leave a comment below for your chance to win a signed copy of 15 Minutes. US entries only, please. The giveaway ends July 15, 2017. Good luck everyone!

Like Loading...
This entry was posted in Cover Reveal and tagged humorous mystery, Larissa Reinhart, Past Perfect Press. Bookmark the permalink.