A day in the life of Mel Turner, Historic Home Renovator by Juliet Blackwell 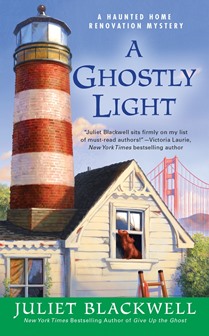 Most days I grab my coffee with own hand and my toolbox with the other, call for my big brown dog, and head into San Francisco to work on some great old Victorian house. But lately, I’ve taken on a new challenge: restoring a historic lighthouse located on a tiny, secluded island in the Bay.

I couldn’t say no. I run a construction crew, and while I adore bringing all historic structures back to life — I’ve been accused of finding charm in even the most dubious, dilapidated hovels– Victorians are my clear favorite. My friend Alicia wants to transform the building into a cozy inn. And this is a lighthouse.

What is it about lighthouses. . .? They carry such a sense of romance and yearning; the wild natural setting, the solitude of the keeper’s life, the promise of safety for passing sailors. This particular lighthouse had been slowly crumbling ever since I was a kid; we used to pass over the Richmond-San Rafael Bridge and my dad would look over at the island and say: “Someone really ought to fix that place up.”

Little did I know that one day, that “someone” would be me.

One problem: I seem to have developed a teensy issue with heights since my last adventure, during which I fought for my life while rolling around on a steep roof, barely escaping being dashed against a Pacific Heights sidewalk several stories below. So there’s that.

My friend Luz has been pushing me to try acupuncture, since acrophobia isn’t something that meshes well with my current job. After all, I climb ladders and crawl around roofs for a living. And now that I’m supposed to be working on a lighthouse. . .well, I haven’t exactly managed to climb the light tower yet. Which isn’t very professional of me.

Also. . .it seems that there may be a ghost up in that tower. (Wasn’t a ghost practically guaranteed, given that this is a lighthouse?) The apparently angry spirit seems to be searching for a very young boy lost many, many years ago. Also, there appear to be folks looking for buried treasure hidden somewhere on the island, and when Alicia’s violent ex-husband shows up “just to say hi”, we know we’re in trouble.

To finish this Lighthouse Inn project on time and on budget –not to mention appeasing the resident ghost and solving a murder– I’ll have to figure it all out. Good thing I’ve got Dog at my side.

You can read more about Mel in Ghostly Light, the seventh book in the “Haunted Home Renovation” mystery series.

In the latest mystery from the New York Times bestselling author of Give Up the Ghost, it will take a beacon of ghostly intervention to guide contractor Mel Turner to the truth. . .

When her friend Alicia hires Turner Construction to renovate a historic lighthouse in the San Francisco Bay, Mel Turner can’t wait to get her hands dirty. Alicia plans to transform the island property into a welcoming inn, and while Mel has never attempted a project so ambitious—or so tall—before, she’s definitely up for the challenge.

But trouble soon arises when Alicia’s abusive ex-husband shows up to threaten both her and Mel, and later turns up dead at the base of the lighthouse stairs. With no other suspects in sight, things start looking choppy for Alicia. Now, if Mel wants to clear her friend’s name, she’ll need the help of the lighthouse’s resident ghosts to shine a light on the real culprit. . .

About the author
Juliet Blackwell is the New York Times bestselling author of the Witchcraft Mystery series and the Haunted Home Renovation Mystery series. As Hailey Lind, Blackwell wrote the Agatha-nominated Art Lover’s Mystery series, in which an ex-art forger attempts to go straight as a faux finisher. She also writes standalone novels, including The Paris Key and Letters from Paris. A former anthropologist, social worker, and faux finisher, Juliet has worked in Mexico, Spain, Cuba, Italy, the Philippines, and France.

Like Loading...
This entry was posted in A DAY IN THE LIFE and tagged cozy mystery, Juliet Blackwell, Penguin Random House. Bookmark the permalink.

7 responses to “A day in the life of Mel Turner, Historic Home Renovator by Juliet Blackwell”