One day on the life of Grandma Bertha by Matt Ferraz 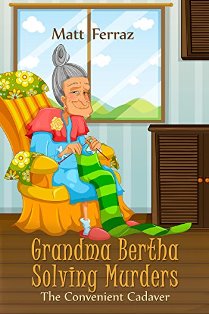 Castor! Rufus! Mustafar! Come here, you boys! Don’t bark at our visitor. I’m sorry, my doggies are not used to new people. Is everything okay? Did Lydia talk to you on and on about how I’m an old lady who says a lot of nonsense? Lydia tells that to everyone. Sorry that you had to pass by her to get to me. We have that back gate over there, but we don’t use it anymore. It’s where they found the cadaver.

You don’t have to worry, they never bite anyone. Let’s go inside. This is my room. It used to be a garden shed, but Todd adapted it for me. Todd is my son, Lydia’s husband. Sweet boy. Lydia wanted me in a retirement home, but Todd didn’t comply. He wanted to have me around in my last years.

Would you like a beer? Too soon for you? Well, I’ll make you a cup of tea then. Do sit down. Just a second, let me get this. How silly, I almost made you sit on my special collector’s DVD of The Exorcist! I shouldn’t let this lie around in here. I’m usually very organized with my DVDs.

It’s very small in here, but it feels cozy, doesn’t it? Todd is taking good care of his old lady. Did you see the little boy with Lydia? That’s Tiny Stu, he’s my only grandchild. I love having him around, but Lydia doesn’t like it when I watch a movie with him. She asked me to show him a superhero film, or a cartoon, but I only have horror films in my collection.

Here’s your tea, dear. So, you wanna know about how I spend my time? I’m usually up very soon every day. I have a very light sleep, and sometimes I snore so loud I wake myself up. Todd brings me breakfast and stays with me until I’m finished, but we don’t talk much.

After he’s gone, I spend most of the time alone, just me and the doggies. We watch a movie or two on the DVD, and then I go out for a walk. At least that’s how things were before they found that poor girl on the back alley, three bullets on her back. Now Lydia doesn’t want me to go out by myself. So I walk in circles around the backyard, pretending I’m somewhere else.

Lydia almost never comes back here to see me. She doesn’t like me very much. She cares about me, though. You can care about someone even though you think they’re crazy. But she brings me supper, and, if it’s cold, an extra blanket.

Most of the time I don’t have anyone to talk to, so I just take care of my stuff. It gets pretty boring sometimes. I’m so old now, and people don’t find me that interesting. But I do my best to stay cheerful. I drink a beer after lunch, one in the afternoon and one in the evening. I’m already a lonely old bag, and don’t want to become a drunkard too.

Do you want to know where they found the body? Right there, behind that wall. She was so young, so pretty. . . it’s a shame! But I’m not gonna let that killer get away with it. Did they tell you that? I’m gonna solve that murder, even if it’s the last thing I do!

Going away so soon? Come back anytime. I enjoy having people to talk to. Would do me a favour? Next time, please bring me some newspapers. They are my favourite source for clues. Just don’t listen to what Lydia has to say about me. And even if you don’t come back, keep your eyes on the news. Soon I’ll be famous, and people will talk about how Grandma Bertha solved that murder! I’ll show everyone!

You can read more about Grandma Bertha in The Convenient Cadaver, the first book in the NEW “Grandma Bertha Solving Murders” mystery series.

When Grandma Bertha moved to her son’s place, she brought along three dogs, several cases of beer and many, many horror film DVDs. While her daughter-in-law insists on the idea of sending Grandma Bertha to a retirement home, a dead girl appears near the house, shot three times in the back. Many years ago, Grandma Bertha let a murderer escape for not trusting in her own detective abilities. Now, armed with her wit and wisdom, she decides to solve that crime before the police. Could this crazy dog lady be a threat to a cold-blooded killer? And for how long can the family stand that situation?

Meet the author
Author of all trades, Matt Ferraz has written thrillers, sci-fi, cozy mysteries and a lot of witty e-mails that sadly can’t be published. With a degree in journalism and a Masters in biography, Matt has works published in English, Italian and Portuguese, and loves trying out new genres.

Killing Dr. Watson was released in March 2016 by MX Publishing. The book deals with TV series fandom, and follows the misadventures of a TV geek with no social life and a Sherlock Holmes actor past his prime who team up and become the most unusual detectives in the business.

With The Convenient Cadaver, Matt has started the “Grandma Bertha Solving Murders” series, starring an old lady who loves beer, dogs, horror movies and a good murder to solve. Grandma Bertha was based on Matt’s own grandmothers and on an elderly friend, all of whom loved to be turned into a literary character.

Matt won’t stop writing, and right now he’s working on the next instalment of “Grandma Bertha” and on a LitRPG book, which will be out next October.

Like Loading...
This entry was posted in A DAY IN THE LIFE and tagged cozy mystery, Matt Ferraz. Bookmark the permalink.