Liam’s day in the life by Melinda Mullet 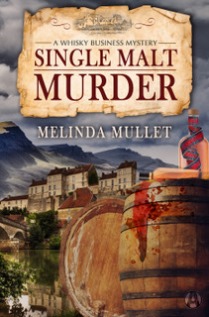 The sunlight slanting across the duvet cover brought warmth to Liam’s legs and he gave a languid stretch before cracking an eye open and registering that she was gone.

In one smooth motion he rose from the bed and hit the floor, trotting down the heavy oak stairs to the kitchen where there was a disappointing lack of food. The acrid smell of coffee still lingered in the air. It meant she’d been there, but she hadn’t bothered to cook. Not even a sausage.

He slipped out through the missing glass panel in the solarium, hidden behind the old wicker lounging chair. Once outside he set off at a good pace toward the distillery down the road. Most days this new life of theirs was a vast improvement over life in London. There they were leash dwellers, surrounded by miles of cold concrete and constantly under assault from the smell of diesel. Here the air was fresh and clean and he was free to roam as he pleased.

The whisky distillery was her new passion and it lay nestled in a sheltered corner of the glen adjacent to a steep ridge where crystalline waters fresh from underground streams emerged high in the hills. The waters cascade down to face of the ridge giving birth to a stream that wound along the backside of the property before rushing onward growing ever wider as it made it’s way to the sea.

He nosed his way through the distillery yard with a purpose. She’d not been there today that was clear. He paused briefly to accept a scratch from the gentleman in charge before heading across the covered bridge that led away from the smells of malted cereal and aging wood. Slipping underneath the neighbor’s five bar gate, he made his way through the adjoining field stopping long enough to nip at the heels of the sheep grazing in the high grass before joining the path into town.

The clear, fast-moving River Alyn wound through the heart of the village of Balfour, separating the main street shops and businesses from the bulk of the houses with their neat front lawns and riotous floral displays. On the residential side, the riverbank was wide and flat and covered with a fine soft grass that had been manicured to make room for several benches and a children’s playground complete with a wooden fort, swings, and a roundabout. On the opposite bank, the village pub boasted an idyllic view across the water from a stone terrace framed by a walled garden.

As he drew closer he could hear her voice carrying across the water from the lawn next to the Golden Stag. She and her companion, Sgt. Bill Rothes, had their backs to him and missed his silent approach absorbed as they were in the scene at their feet.

He raised his nose to the wind. An intriguing smell emanated from the area, a mixture of newly turned earth and something older and more carnal. Liam’s pace quickened as he made a bee line for the gaping wound in the soil that had been created by the JCB parked nearby in lane. There was a treasure to be had. A smorgasbord of tantalizing smells called to him with wanton abandon from that hole.

Why they were debating about the largess at their feet was beyond him. But clearly they needed him to demonstrate exactly what should be done in a situation like this. Putting on a last burst of speed he sprang from his haunches, silken cream and brown fur flying out behind him in the wind. He landed softly in the dirt and in one fluid motion scooped up the largest of the bones in his mouth before turning to regard them with a self-satisfied smile.

If he’d hoped to be praised for this effort he was sorely disappointed. Bill bellowed like a wounded bull moose and she slid ungracefully down into the hole making a valiant attempt to snatch the prize away.

Now that was more like it. A rousing game of keep away. He scrambled from the hole and took off across the lawn spinning circles and changing directions with abandon as she slipped around in an attempt to pursue him. Bill watched their antics with a sour look on his face offering unhelpful suggestions that only served to make the situation more fraught.

Finally she snatched the bone and collapsed on the grass with a decidedly bitter look on her face.

“Bad boy. What on earth were you thinking?” she demanded.

I was thinking this was an odd place to bury a decent collection of bones, but I guessed that was not what she was thinking.

Sgt. Bill extended a gloved hand for the human femur that had been the subject of dispute. “Why is it that every time you come back to our peaceful little corner of the world someone winds up dead?” he asked.

It was an eminently reasonable question, but one she clearly had no answer for.

You can read more about Liam in Single Malt Murder, the first book in the NEW “Whiskey Business” mystery series.

Abigail Logan never expected to inherit a whisky distillery in the Scottish Highlands. But in the first novel of an engaging new series blending fine spirits with chilling mystery, Abi finds that there are secrets lurking in the misty glens that some will go to any lengths to protect . . . even murder.

When Abi inherits her uncle’s quaint and storied single malt distillery, she finds herself immersed in a competitive high-stakes business that elicits deep passions and prejudices. An award-winning photojournalist, Abi has no trouble capturing the perfect shot—but making the perfect shot is another matter. When she starts to receive disturbing, anonymous threats, it’s clear that someone wants her out of the picture. But Abi’s never been one to back down from a fight.

Arriving on the scene with her whisky-loving best friend, Patrick, and an oversized wheaten terrier named Liam, Abi seems to put everyone in the bucolic village on edge—especially her dour but disturbingly attractive head distiller. Acts of sabotage and increasingly personal threats against Abi make it clear that she is not welcome. When one of Abi’s new employees is found floating facedown in a vat of whisky, Abi is determined to use her skills as an investigative journalist to identify the cold-blooded killer and dispense a dram of justice before he strikes again. But distilling truth from lies is tricky, especially when everyone seems to have something to hide.

Meet the author
Melinda Mullet was born in Dallas and attended school in Texas, Washington D.C., England, and Austria. She spent many years as a practicing attorney before pursuing a career as a writer. Author of the Whisky Business Mystery series, Mullet is a passionate supporter of childhood literacy. She works with numerous domestic and international charities striving to promote functional literacy for all children.

Melinda lives just outside of Washington, DC with her whisky-collecting husband, two extraordinary young women she is proud to call her daughters, and an obedience school drop out named Macallen.

Like Loading...
This entry was posted in A DAY IN THE LIFE and tagged Alibi/Random House, cozy mystery, Melinda Mullet. Bookmark the permalink.