Malice Domestic is an annual fan convention in the metropolitan DC area that celebrates the traditional mystery, books best typified by the works of Agatha Christie. The genre is loosely identified as mysteries which contain no explicit sex, or excessive gore, or violence.

I had a world-wind weekend starting Thursday evening at the Edgar’s Award then Friday morning, it was onto a road trip to Bethesda with Terri Bischoff and Catriona McPherson driving making good time on the trip. We even beat some of those who took the train down who left at more or less the same time.

Upon arrival at the hotel, I was met by friends and it felt like homecoming week (and I’ve never been to one). It was great seeing friends, old and new and introducing my new housemate, Koko. She had a wonderful time hanging out with my friends, but alas, I had to ship her home earlier than planned.

The hotel has done some renovating and it showed in the room. I had a nice corner one with a hypoallergenic filter machine. What I noticed most was the many outlets in which to plug the many electronics I travel with. It was funny when I was trying to find the closet which was tucked inside the vestibule of the bathroom. On the bathroom mirror was a clock which kept the right time.

Friday afternoon was a mish mash of a day with socializing with friends, dining out and just relaxing.

On Saturday I was moderating the “What’s Your Line” panel with Mary Angela, Kate Carlisle, Mary Feliz and Sherry Harris on the panel. I was a bit nervous because I wasn’t sure of the questions and how it would play out. But it did and I even ran out of questions to ask and opened it up to the audience and we had great questions. We also had good laughs during our panel. When people came up to me and said our panel was good . . . that made my day. The day ended with the banquet where I had the chicken and opted for the fruit dessert (not a fan of mousse). It was a long day for me, so I crashed earlier.

On Sunday I went to breakfast with author Cathy Ace and we talked about books and marketing. Headed back to hotel for a panel before it was time to check out my room and wait for the shuttle to whisk me away to the airport. When I arrived at the airport I ran into Jessie and Terri who’s flight was moved to my gate. My flight was delayed but luckily I was able to get on a flight to LaGuardia and upon landing discovered that my luggage was still in DC. Not to worry, Koko was at another destination waiting to travel home. Luggage was delivered Monday morning and Koko was delivered Tuesday afternoon. All in all had a wonderful time and I look forward to next year’s Malice which will be in a new hotel.

This is such a wonderful convention and  I’m looking forward to next year’s Malice Domestic where it will be held in a new hotel. 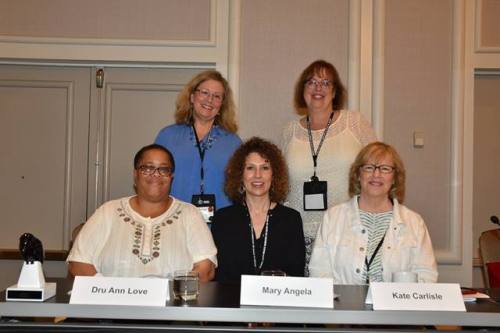 glass work of Cheryl Hollon’s book cover by her husband 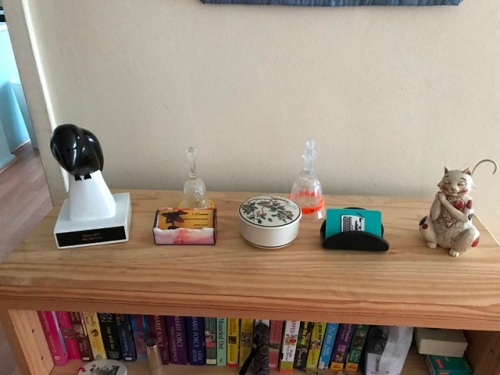