My Musing ~ Till Death by Jennifer L. Armentrout

Till Death by Jennifer L. Armentrout is published by William Morrow, February 28, 2017 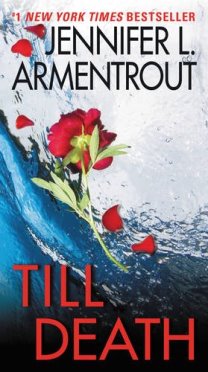 It’s been ten years since Sasha Keaton left her West Virginia hometown . . . since she escaped the twisted serial killer known as the Groom. Returning to help run her family inn means being whole again, except for one missing piece. The piece that falls into place when Sasha’s threatened—and FBI agent Cole Landis vows to protect her the way he couldn’t a decade ago.

First one woman disappears; then another, and all the while, disturbing calling cards are left for the sole survivor of the Groom’s reign of terror. Cole’s never forgiven himself for not being there when Sasha was taken, but he intends to make up for it now . . . because under the quirky sexiness Cole first fell for is a steely strength that only makes him love Sasha more.

But someone is watching. Waiting. And Sasha’s first mistake could be her last.

I was immediately pulled into this fast-paced and action packed drama and it was hard to put down, quickly becoming a page turner. The author did a great job in telling this story evoking all kinds of emotions from intrigue, to suspense, to trepidation, all wrapped up in a satisfying story. The directions the story took had me hovering all the that was happening and when I thought I had it all figured out . . . bam, the author went another way, truly enhancing how the plot will play out in the end. Grippingly tantalizing is how I found the narrative of this well-defined drama.

FTC Full Disclosure – I received a digital ARC of this book from the publisher.

Like Loading...
This entry was posted in Reviews and tagged Jennifer L. Armentrout, romance suspense, William Morrow. Bookmark the permalink.

One response to “My Musing ~ Till Death by Jennifer L. Armentrout”