A day in the life mess of Poppy Peters by A. Gardner 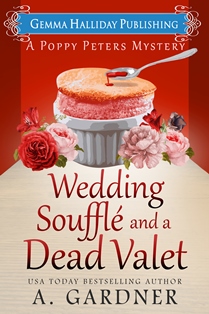 Every once in a while you meet someone who portrays a certain word beautifully. By this, I mean that if you were to look up said word in the dictionary, this person’s face would appear instead of a description. Me? Well, you would most likely find my picture next to the definition of haphazard. Or hopelessly single, if you ask my mother. How else would you describe a thirty-something ballerina turned pastry chef who now finds herself unemployed? Marta, however, spells perfectionist in every way, shape, and form. So, you can imagine how shocked I was to see her mascara running, lipstick on her teeth, and a ratty red bun on top of her head.

Marta is losing it.

Marta is the Sous Pastry Chef extraordinaire at a popular Parisian bakery called Le Croissant. Her piping skills are superb, and her pastry dough is always flawless. If you haven’t already guessed, she wasn’t very fond of me when I first set foot in her kitchen. I was the mouthy American intern and Marta never so much as smiled in my direction. In fact, the rumor among the staff was that the cupboards in her flat were stocked with cauldrons and pointy hats. But a weekend catering gig in Cornwall changed all of that.

Now, Marta is getting married in the little English town of Woodbury, and I’m her bridesmaid.

Detective Berry, the groom, gave me one simple task. He told me to keep Marta calm because a dead body was found in the parking lot during her wedding dinner. I just happened to be the last person the victim spoke to before he died. All the scones and clotted cream in the world can’t distract me from that little tidbit of information. I haven’t slept since.

I have found a way to handle this situation. I think. Stress management isn’t my strong suit, but I would say that I’m better at it than Marta’s grumpy old neighbor, Mr. Fletcher, who walks around the village griping at people in his bathrobe. Marta and I are baking cheese soufflés and banoffee pies. Cooking is a language that we both speak fluently. Believe it or not, scrambling around the kitchen is helping us both hold onto the sliver of sanity we have left. And Marta is really going to need her sanity because her dad is coming to her wedding and her mother is coming to her wedding. . .and her mother’s new boyfriend.

You can read more about Poppy in WEDDING SOUFFLÉ AND A DEAD VALET, the fifth book in the Poppy Peters mystery series.

Poppy Peters, accidental sleuth and unemployed pastry chef, is back in Europe attending a friend’s wedding. But when a parking valet for the big event turns up dead in the front seat of an antique car, Poppy learns that the little English village of Woodbury isn’t all scones and clotted cream. Determined to help the bride and groom, she follows the killer’s trail which leads her from the local bakery to a grand estate owned by the town’s infamous Lord Chutney. Poppy quickly discovers that the village is keeping a deadly secret. Between a disgruntled shopkeeper, spiteful townsfolk, and a missing bridesmaid, Poppy is convinced that the murderer is living just a cottage away. And may have his sights on her as the next victim.

Meet the author
USA Today Bestselling author, A. Gardner, is a native westerner exploring the sweet bites of the south. After years of working in the healthcare industry, she moved across the country with her husband and adventurous baby boy. She is a mystery writer with a serious cupcake obsession and a love of storytelling that began at an early age. Visit her blog at gardnerbooks.blogspot.com. You can also find her on Facebook and Twitter.

Wedding Soufflé And A Dead Valet is available at retail and online booksellers.

Like Loading...
This entry was posted in A DAY IN THE LIFE and tagged A. Gardner, cozy mystery, Gemma Halliday Publishing. Bookmark the permalink.

4 responses to “A day in the life mess of Poppy Peters by A. Gardner”