A day in the life of Holly Miller by Krista Davis 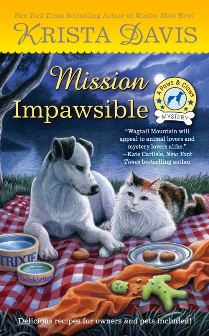 Finding a corpse on a date is a whole new way of learning a lot about a person very fast. But I don’t recommend it.

My day started fairly well, with a deliciously fattening breakfast of waffles with fresh local blackberries and, naturally, a side of bacon. Living in an inn had its perks. Months ago, my grandmother and her best friend came up with the notion of a matchmaking event for pet-lovers on Wagtail Mountain. They insisted that animals would break the ice and help their people overcome the awkwardness of meeting strangers.

Maybe so. I wasn’t going to participate. But I was plenty busy at the Sugar Maple Inn when the event began. We were booked solid. By late afternoon, all our guests had checked in except for one, and we were turning people away.

In spite of my disinterest in being matched up, my Jack Russell Terrier, Trixie, showed up with a very cute yellow lab named Cooper. And Cooper happened to have a dad, John, who was almost as adorable as his lab. Had I been interested in dating, he would certainly have been a contender.

As luck had it, I made a very poor first impression. John thought I was lying to him and then my former boyfriend arrived unexpectedly and acted like we were still together. What was that about? Not that I cared. Well, maybe a little.

When John and Cooper showed up at the dog park that night, I tried to explain. Not only was he cute but he had a great sense of humor. I agreed to have a drink with him. After all, what was the worst that could happen? If I didn’t like him, I could just walk home.

But on our way to the bar, Trixie found a dead man sprawled in the grass. Now there’s some stress that you just don’t encounter on a regular date.

You can read more about Holly in MISSION IMPAWSIBLE, the fourth book in the Paws and Claws mystery series and in bookstores on February 7th.

In the pet-friendly town of Wagtail, Virginia, there’s no love lost when Holly Miller meets her match in a murderer. . .

Holly and her grandmother, Oma, are working their tails off to prepare the Sugar Maple Inn for an upcoming matchmaking event for pet owners. While Holly has no interest in pairing up, Oma plans on playing Cupid and finding someone to warm her reluctant granddaughter’s heart.

Unfortunately, one man Holly does meet is cold—dead cold—and he has a personal letter from Oma in his pocket. As suspicion is cast over the inn’s guests, Holly—with the help of her furry friends, Trixie the Jack Russell and Twinkletoes the cat—must fetch the real killer, or she may soon have a date in court.

Books 1-3:
Murder, She Barked
The Ghost and Mrs. Mewer
Murder Most Howl

About the author
New York Times Bestselling author Krista Davis writes the Paws and Claws Mysteries set on fictional Wagtail Mountain, a resort where people vacation with their pets. Krista also writes the Domestic Diva Mysteries. Like her characters, Krista has a soft spot for cats, dogs, and sweets. She lives in the Blue Ridge Mountains of Virginia with three dogs and two cats.

Mission Impawsible is available at retail and online booksellers.

Like Loading...
This entry was posted in A DAY IN THE LIFE and tagged cozy mystery, Krista Davis, Penguin Random House. Bookmark the permalink.