A day in the life of Zoe Faust by Gigi Pandian 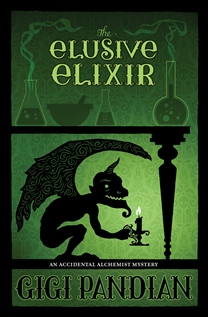 Less than a year ago, I parked my Airstream trailer and bought a crumbling Craftsman house in Portland, Oregon. I’ve been welcomed into a wonderful circle of friends who congregate at Blue Sky Teas, found myself falling for a complicated and wonderful man, and grown a thriving backyard garden that feeds my body and soul. It almost sounds like a normal life, something I never thought I’d have.

But then there’s the gargoyle.

My best friend Dorian Robert-Houdin is a three-and-a-half-foot gargoyle who’s a gourmet chef and fancies himself a modern-day Poirot. His body is the color of stone, so he does indeed have little grey cells. Or at least I suppose they’re cells, since he’s every bit as alive as I am.

Dorian was once a stone carving intended for Notre Dame in Paris, but 150 years ago he was brought to life through alchemy. When Dorian sought me out here in Portland, asking for help deciphering an ancient book of alchemy, I was startled but didn’t run away screaming. That’s because I’m an alchemist. I accidentally discovered the Elixir of Life over 300 years ago.

Dorian has a talent for getting into trouble. But to be fair to him, one of his problems is very real. And it’s why I’ve traveled from Portland to Paris, France this week.

My friend is slowly turning back to stone. Far from being a natural death, soon he’ll be wide awake but trapped in unmoving stone—unless I can discover the secrets of an ancient book of alchemy that’s linked to Notre Dame.

Unfortunately, the two of us have attracted some unwanted attention. Dorian would rather be cooking vegan feasts, and I’d rather be gardening and spending time with Max Liu, but between a missing bookseller, a WWII survivor who discovered my secret, and a long-lost relative, we won’t be relaxing any time soon.

Instead I find myself fleeing Paris for the second time in my life, hoping my troubles in Paris don’t follow me back to Portland. If they do, I have a feeling I won’t be able to stop Dorian from playing detective. Please wish me luck. I’m going to need it.

THE ELUSIVE ELIXIR is the third book in the Accidental Alchemist mystery series published by Midnight Ink, January 2017. A few of Dorian’s favorite vegan recipes are included in the back of the book.

Dorian Robert-Houdin, the three-and-a-half-foot gargoyle chef who fancies himself a modern-day Poirot, is slowly turning into stone, and it’s up to Zoe Faust to unravel the alchemical secrets that can save him. When they discover that a long-lost stone gargoyle with a connection to Dorian has reappeared in Europe, the stakes are even higher. From Portland to Paris, Zoe searches for the hidden knowledge she needs, but a cold case that harkens back to 1942 throws her off course. With an ailing friend desperately trying to discover his own elixir of life and a new romantic interest offering the first chance at love she’s had in nearly a century, Zoe is torn between a dangerous form of alchemy and her desire for a safer life.

About the author
Gigi Pandian is the USA Today bestselling author of the Jaya Jones Treasure Hunt mysteries, the Accidental

Alchemist mysteries, and locked-room mystery short stories. A cancer diagnosis in her 30s taught her two important life lessons: healing foods can taste amazing, and life’s too short to waste a single moment. Gigi spent her childhood being dragged around the world by her cultural anthropologist parents, and now lives in the San Francisco Bay Area with her husband and a gargoyle who watches over the backyard garden. Gigi’s fiction has been awarded the Malice Domestic Grant and Lefty Awards, been nominated for Macavity and Agatha Awards, and her most recent novel Michelangelo’s Ghost was recently named a “Best of 2016” cozy mystery by Suspense Magazine.

Giveaway: Leave a comment below for your chance to win a set of 7 book-themed recipe cards. US entries only, please. The giveaway ends January 15, 2017. Good luck everyone!

Like Loading...
This entry was posted in A DAY IN THE LIFE and tagged Gigi Pandian, Midnight Ink, traditional mystery. Bookmark the permalink.