The Game with Cara Lindstrom by Alexandra Sokoloff 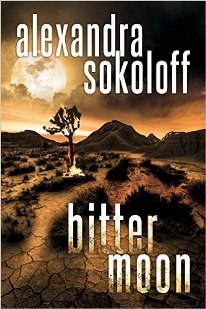 As a ward of the court, Cara’s Thanksgiving would be entirely different from the warm holiday we generally associate with the day. This season especially I wanted to remember that not everyone is sitting down to turkey dinners and football and family.

The van turns, rolls up a curved drive toward a low, wide suburban box with two wings, a brown lawn, scruffy palm trees and a dry fountain with a dusty angel. The group home.

She gets out of the van holding her cheap backpack, containing one change of clothes: jeans and a turtleneck, and socks and a sleep shirt. All the possessions she has in the world.

She forces herself to walk up the path to the porch. She is looking at the doors, the windows, the gates, checking escape routes, even as The Game begins. The Game of Normal.

She must play it—play it and win.

She will never go back to jail, ever.

Inside the entry hall she glances around quickly, memorizing the floor plan and exits. She has been in the black hole of The Cage for two endless years. But there is nothing she doesn’t know about group homes. She has been on every level. Levels 13 and 14 serve the most troubled children; they are basically small mental institutions. This home is a Level 5: there is no psychiatrist on site, but one will come every week. There will be five other wards of the court, drugged to the gills, and a staff that changes shifts every eight to ten hours. The staff’s stated job is to watch you. Keep you from hurting yourself, the other residents, and other people. Most of the staff works for the paycheck. A few are crusaders. Others . . . others best not to think about.

She will go to school, then straight back to the home. Ask permission for everything: to get food from the refrigerator, to watch TV, use the phone, go into the backyard, or take a shower. Bedroom doors must be left open at all times. The mirrors in the bathroom will be polished steel, not glass, to prevent wards from breaking the glass and slashing their wrists.

But all told, it is better than The Cage. There are windows. There are no shackles. Little things like that. And for the moment, it is safe enough. There are worse things out there than zoned-out kids.

She finds the psychiatrist sitting behind an ugly desk in a long room lined with books. She sits, and he begins the way they always begin.

“How are you feeling today, Cara?”

He is already looking at her neck and it is all she can do not to lunge across the desk and scratch out his eyes.

“Fine,” she says, without inflection.

“I’ll just start by asking a few questions, all right?”

The questions are always the same:

Her answers are carefully calculated. Of course she doesn’t think about harming herself. Of course she doesn’t think about harming anyone else. For some of the lesser questions, like Were you sad this week?—it’s safe to answer yes or “once or twice” or “on a few days.” That’s Normal. Every answer she gives is designed to make her appear Normal, just as every question is designed to trick her into seeming Not Normal.

And then come the crucial questions, the ones she must always answer with No.

“Are you seeing anything that shouldn’t be there?”

You mean the shadows that are more than shadows?

“Are you hearing voices?”

Just the moon talking, and the air, and the lizards . . .

“Nothing that scares you?”

No matter how she answers these questions, They will give her medication anyway. All the group home kids are medicated. She wants the medication. She would like it to work.

According to Them, the things she sees aren’t real. So they give her drugs to make them go away.

The problem is, they don’t.

Bitter Moon is Book 4 of the Huntress/FBI Thrillers, which should be read in order! Books 1-3, Huntress Moon, Blood Moon, and Cold Moon are  currently on sale on Amazon US for $1.99 each. Amazon Prime members can read Huntress Moon for free. Published by Thomas & Mercer, November 2016

FBI agent Matthew Roarke has been on leave, and in seclusion, since the capture of mass killer Cara Lindstrom—the victim turned avenger who preys on predators. Torn between devotion to the law and a powerful attraction to Cara and her lethal brand of justice, Roarke has retreated from both to search his soul. But Cara’s escape from custody and a police detective’s cryptic challenge soon draw him out of exile—into the California desert and deep into Cara’s past—to probe an unsolved murder that could be the key to her long and deadly career.

Following young Cara’s trail, Roarke uncovers a horrifying attack on a schoolgirl, the shocking suicide of another, and a human monster stalking Cara’s old high school. Separated by sixteen years, crossing paths in the present and past, Roarke and fourteen-year-old Cara must race to find and stop the sadistic sexual predator before more young women are brutalized.

Meet the author
Alexandra Sokoloff is the Thriller Award-winning, Bram Stoker and Anthony Award-nominated author of twelve bestselling supernatural and crime thrillers. The New York Times has called her “a daughter of Mary Shelley” and her books “Some of the most original and freshly unnerving work in the genre.”

As a screenwriter she has sold original suspense and horror scripts and written novel adaptations for numerous Hollywood studios (Sony, Fox, Disney, Miramax), for producers such as Michael Bay, David Heyman, Laura Ziskin and Neal Moritz.

She is also the author of the internationally acclaimed Screenwriting Tricks for Authors workbooks, based on her workshops and blog. Her Thriller Award-nominated Huntress Moon series follows a haunted FBI agent on the hunt for a female serial killer, smashing genre clichés and combatting the rise of violence against women on the page and screen. Connect with Alexandra at http://AlexandraSokoloff.com.

Giveaway: Leave a comment below for your chance to win an audiobook of the first three books in the Huntress/FBI Thrillers (Huntress Moon, Blood Moon, and Cold Moon). Huntress Moon is a Voice Arts Award winner for Best Narration, Mystery & Thriller. The giveaway ends November 26, 2016 at 11:59 AM EST. Good luck everyone!

Like Loading...
This entry was posted in A DAY IN THE LIFE and tagged Alexandra Sokoloff, Thomas & Mercer, thriller. Bookmark the permalink.

12 responses to “The Game with Cara Lindstrom by Alexandra Sokoloff”