A Day in the Life with Shannon Hammer by Kate Carlisle 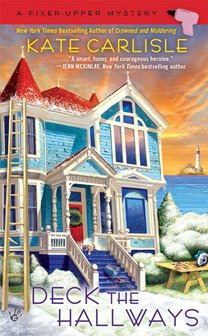 New York Times bestselling mystery author Kate Carlisle is a native Californian who worked in television production for many years before turning to writing. Kate also studied acting and singing, toiled in vineyards, collected books, joined a commune, sold fried chicken, modeled spring fashions and worked for a cruise ship line, but it was the year she spent in law school that finally drove her to begin writing fiction. It seemed the safest way to kill off her professors. Kate’s latest book, Deck The Hallways (a Fixer-Upper Mystery), is available in paperback and e-book wherever books are sold.

Visit Kate online at www.KateCarlisle.com, and be sure to pop into the Secret Room, where she’s giving away a Deck The Hallways Christmas ornament every day in November!

“I’ll take it,” I said, handing the green cashmere scarf back to the shopkeeper. My friend Marigold loved all things colorful, the brighter the better, perhaps in reaction to growing up Amish.

Although there were technically twelve shopping days until Christmas, today was it for me. Starting tomorrow, I’d be busy from sunup to sundown.

My name is Shannon Hammer. I’m a contractor here in Lighthouse Cove, California, but for the next two weeks, I would be the project manager on the most massive project the Holiday Homebuilders had ever attempted. We were converting an 1867 Victorian mansion into apartments for deserving families. I wasn’t too worried about the construction crews that would be working on each apartment—they were pros, and I knew I could count on them. But the volunteers were an unknown and were already keeping me up at night with apprehension. I hoped they wouldn’t cause too much trouble.

I scoffed at myself for being silly. What was the worst thing that could happen?

A shiver ran through me. I’d already been through the worst—murder—on multiple occasions, but surely that wouldn’t happen again. Not on this job, which was supposed to be all about goodwill.

I shrugged off my doom and gloom thinking. I was as prepared as I could be. I’d made my list and checked it twice. So to speak.

“Here you are, Shannon,” the shopkeeper said, handing me a brightly colored package. “Merry Christmas!”

As I stepped out into the bright California sunshine, I tried not to grimace. I’d hoped that today’s shopping excursion would shake me out of my grumpy mood. Buying gifts for my loved ones should do that, right? Except I didn’t know whether or not to buy a gift for one particular person—man—Mac—and that uncertainty was keeping me firmly in a funk. If I did buy him a gift, should it be as “just friends”? I’d thought we were becoming more than that, but I wasn’t sure anymore. Not after— 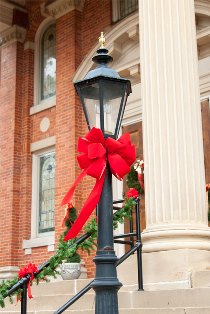 No. Not thinking about that today.

I decided to take a break from shopping and walk home to drop off my packages. Although I’d grown up in Lighthouse Cove, I’d never tired of walking through our quaint downtown streets. Our town was known for its Victorian architecture. The shops along the town square continued this theme, with pretty painted facades in feminine colors. White holiday lights lit up every window, and red bows decorated the lampposts. I waved at all the people I knew but didn’t stop to chat.

When I reached my driveway, I felt a stab of loneliness. Not only was my guest apartment glaringly unoccupied, but Dad’s RV wasn’t parked here as usual, either. Most people wouldn’t be thrilled by a parent camped out in their driveway, but I loved having him nearby. To be honest, though, his absence just now was probably a blessing.

I didn’t want Dad anywhere near the Holiday Homebuilders project. He had an almost unnatural hatred for the banker overseeing the work. Potter. I couldn’t blame Dad. The man was odious. He did everything he could to push Dad’s buttons. With Dad’s weak heart and short fuse where Potter was concerned, it would be best to keep them apart. Far apart.

A blur of white flashed past my front door from the inside, and Robbie, my Westie, barked impatiently at me. We’d been separated for a whole hour already, and he couldn’t wait one more second to see me again. I couldn’t help but smile. It was nice to be loved.

I let myself into the house, and as I cuddled Robbie and Tiger, my marmalade cat, I vowed that I would shake this cranky mood. I would get into the Christmas spirit even if it killed me.

To celebrate the release of Deck the Hallways, Fixer-Upper Mystery 4, Kate is giving away one of these Christmas ornaments every day during the month of November. Sign up for a chance to win in the Secret Room at KateCarlisle.com!

Deck the Hallways is the fourth book in the Fixer-Upper mystery series, published by Penguin Random House, November 2016.

Someone’s been slayed! If contractor Shannon Hammer can’t nail the real culprit in the St. Nick of time, her dad will wind up in the clink. . .

Even at Christmastime, Shannon is more spackle than sparkle, which is why she leaps at the chance to transform a grand old Victorian mansion into ten charming apartments for homeless families. Filled with the spirit of the season, all of Lighthouse Cove turns out to help—including her best friends, a troupe of far-from-angelic Santa Claus impersonators, and her father, Jack.

But their merriment is soon dashed by a heated scuffle between Jack and the miserly president of the bank who’s backing the project. When the man is murdered, all eyes are on Jack, and visions of prison time dance in Shannon’s head. Now, she needs to pull off a crime-solving miracle, before her father’s Christmas goose is cooked. . .

Giveaway: Leave a comment below for your chance to win a signed copy of Deck the Hallways. US entries only, please. The giveaway ends November 11, 2016 at 11:59 AM EST. Good luck everyone!

Like Loading...
This entry was posted in A DAY IN THE LIFE and tagged cozy mystery, Kate Carlisle, Penguin Random House. Bookmark the permalink.