A Day in the Life of Isabella Lewis by Wendy Byrne 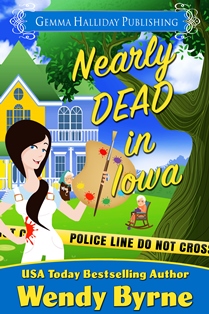 Overnight my Manhattan lifestyle became a thing of the past when my marriage of four and a half years dissolved. Just like that, I was transported from rich socialite to nearly destitute. And then, like some kind of miracle or nightmare, depending on your perspective, my long lost father contacted me and gave me a destination for my homeless, near penniless, self.

Except dear old dad lived in Iowa. As a gal who hadn’t been farther west then the upper west side of Manhattan, I’m picturing a whole lot of cows and corn and not much else. Needless to say, I’m not thrilled.

Despite my reticence, I put on a happy face and travel to my father’s house, hoping for the best, but anticipating the worst. I’d like to say things got better once I got there, but they didn’t, especially when I stumbled over a dead body. Thankfully, it’s not my father, but it’s his BFF—with my father suspiciously MIA.

After that, returning to my old life seems like a great idea, except it can’t happen financially, physically or any other way. Besides the sheriff is making me stick around while he investigates to see if I had anything to do with what happened.

Luckily, I meet a group of ladies who are Murder She Wrote groupies and would like nothing better than to help me figure out who murdered my missing father’s BFF. For women in their 80s they’re a feisty bunch—even if they are obsessed with pepper spray and stun guns along with bingo and craps. Needless to say, I have my hands full keeping them out of trouble—and by association—me.

An excerpt from my story:

The place was dark as a cave and a little spooky. I could barely see a hand in front of my face as I walked inside. I rummaged through my purse to find my phone, but remembered I’d left it on the front passenger seat when I’d checked my email. Instead, I brushed my shoulder along the wall trying to feel my way to a light switch. I had a really bad feeling about this as what ifs tumbled through my brain.

“Hello. Anybody here?” The words came out in a shaky whisper.

A strobe light broadcasting bad idea followed by what are you thinking? throbbed inside my brain. It felt like I was in my own version of a horror movie where I might scream at the main character, “Don’t go down into the basement!” Of course the poor heroine always did, leading to all manner of bloody carnage. That was not going to be me. Yep. I definitely needed to reconsider this harebrained scheme or at least come back in the daylight hours where all those things that went bump in the night were no longer fueling my imagination.

That was the first brilliant thought I’d had since I’d stumbled inside. I could check on dear old Dad in the morning. With my mind made up, I headed toward the front door and picked up my pace.

Before I reached the safety of the front door, I tripped and went crashing to the floor. On my hands and knees and with my arms outstretched, I patted the floor and tried not to think about what I might not see, like mouse droppings and creepy crawly stuff.

I swiped a wide arch with my right hand and encountered something solid. It felt like. . .skin. I sucked in a breath. It had to be my imagination. But then I touched what felt like fingers. Then a torso.

And I let out a scream that might have knocked some plaster off the walls. And then I think I might have done something really girly and passed out.

Manhattan socialite Isabella “Izzy” Lewis is in desperate need of a fresh start. Ending up on the wrong side of a nasty divorce, jobless, and pretty much homeless, she’s hit rock bottom. So when the father she never knew asks her to visit him in Iowa, she figures she has nothing more to lose—until she arrives at his home and promptly stumbles (literally) over a dead body.

Now her missing father is murder suspect number one, and Izzy’s in the crosshairs of the local sheriff who’s convinced she’s somehow involved. After being reluctantly adopted by a local group of Jessica Fletcher wannabes, Izzy resolves to find her missing father and the killer. A job that proves harder than she thought as she juggles running down clues to the killer’s identity, her hot but suspicious new next door neighbor, keeping the sleuthing senior citizens out of trouble, and above all, going at least one day without being nearly dead in Iowa.

About the author
Wendy lives in the Chicago area. She has a Masters in Social Work and worked in the child welfare field for twelve years before she decided to pursue her dream of writing.

Between teaching college classes, trying to get her morbidly obese cat to slim down and tempering the will of her five-year-old granddaughter, who’s determined to become a witch when she turns six so she can fly on her broom to see the Eiffel Tower and put hexes on people–not necessarily in that order–somehow Wendy still manages to fit in writing. She spends the remainder of her days inflicting mayhem on her hero and heroine until they beg for mercy.

She has written three books in the Hard Targets trilogy, Hard to Kill, Hard to Trust and Hard to Stop through Gemma Halliday Publishing. In addition, she has three contemporary romance novels through Entangled Publishing called The Millionaire’s Deception, Bad to the Bone, and The Millionaire’s Revenge (December 2016) plus three self-published novels, The Christmas Curse (novella), Accused and Alone (novella).

Giveaway: Leave a comment below for your chance to win a digital copy of one of her books (see above). The giveaway ends November 12, 2016 at 11:59 AM EST. Good luck everyone!

Like Loading...
This entry was posted in A DAY IN THE LIFE and tagged cozy mystery, Gemma Halliday Publishing, Wendy Byrne. Bookmark the permalink.