A Day in the Life with Hamlet by Ali Brandon 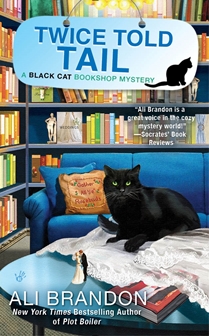 Meow! This is Hamlet the Cat. Yes, that Hamlet. . .feline mascot extraordinaire of Pettistone’s Fine Books in Brooklyn. I am in charge of making sure that the bookstore operates properly, and that our customers behave themselves. Of course, my caretaker, Darla Pettistone, thinks she is the boss. But that’s just because she inherited the store a couple of years ago from my previous caretaker, who happened to be her Great-Aunt Dee. Everyone else besides Darla knows who really runs things around here.

I’ve been asked to talk about my usual day. I have to admit that my routine has changed somewhat since Darla took over the bookstore. Once, I spent most of my time catching up on my naps. It was hard work, but I still managed eighteen hours of sleep out of every twenty-four, even with all my management duties. Why so little sleep? Well, when you have customers who read the magazines without paying, and who hide their empty drink cups on the back shelves, it is imperative that the feline in charge keep one eye open at all times.

But things changed after Darla arrived. It was quite strange, but suddenly humans all around us began to meet untimely ends…and with no nine lives to allow for what humans call a “do over”. And since I am the star of the Black Cat Bookshop Mystery series, that meant that in addition to my bookstore duties, I now had to solve murders. Growl!

I let Darla and her friend Jake do all the paw work, but it takes a feline brain to achieve superior mental sleuthing. It was always obvious to me from the start who the true murderer was in each story. Unfortunately, Darla and her friends are not as clever as felines. No matter how hard I tried to share my clues—usually, titles of books that I pulled from the shelf—they didn’t always understand what I was trying to say. Sometimes, I had to lead them right to the bad human before they figured out whodunit. That is especially true in my new book, Twice Told Tail. Hisssss! 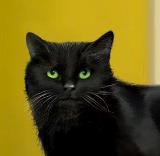 But I have to tell you that my daily routine will be changing yet again. You see, Ali Brandon has informed me that Twice Told Tail will be the final book in the Black Cat Bookshop Mystery series. She said something about the vagaries of publishing. I am not sure what that means, except that it made her—and me—very sad. But then she reminded me that just because I’m not having adventures in books anymore doesn’t mean that I’m going away.

Ali Brandon says that Darla and Jake and Robert and James and Reese and Mary Ann and I will still be at Pettistone’s Fine Books solving mysteries in a place that humans call The Imagination. She said that all book characters go to live in that place when their series end. But that is not bad, because readers can always find them—and us!—there anytime.

And, in real life, I am still hanging out with Ali Brandon on my Facebook page talking to my human friends and their felines. I plan to be there for some time to come, though perhaps I will be introducing you to some new fictional felines in what Ali Brandon calls the near future. We shall see. In the meantime, I hope you will read my new book, Twice Told Tail, which has a few sad endings but which also hints at some happy new beginnings. Finally, Ali Brandon and I wish to thank all of you who have read and enjoyed our books over the years. We greatly appreciate you and think that you are all very clever humans, indeed. Purrrrrrrrrrrrr. . .

The New York Times bestselling author of Plot Boiler takes us back to Pettistone’s Fine Books, where Hamlet the cat isn’t the only shadowy figure lurking around the Brooklyn brownstone.

As Thanksgiving approaches, Darla Pettistone is preparing for the busiest shopping season of the year. They’ve recently launched their online store, where one anonymous bidder is offering a suspiciously high price for an antique book—and Darla doesn’t need Hamlet’s special senses to know that something isn’t quite right.

However, there’s no time to think about that after Darla’s roped into helping bridezilla Connie Capello get ready for her big day. After looking at wedding dresses, Darla and Connie head to an antique store to find her “something old”—but they find someone dead instead. When Darla learns that the shop carried a copy of the book that her mysterious bidder is after, she suspects she’ll need Hamlet’s help to discover who penned the poor soul’s final chapter, before someone else is read their last rites.

Together, the pair work and sleuth out of Darla’s Brooklyn-based independent bookstore. Whenever a murderer is on the prowl, Hamlet and Darla are ready to pounce—and they always manage to collar the killer! The sixth and final book in the series, Twice Told Tail, hits the shelves November 1. But Ali promises that more cat fiction of some sort is on the horizon.

A native Texan with a degree in Journalism from the University of Oklahoma, Ali now lives in South Florida with her hubby, four dogs, and four very spoiled cats. She’s a member of Mystery Writers of America, a former board member of the MWA Florida Chapter, and a member of the Cat Writers’ Association. You can find her and Hamlet at alibrandon.com, dianestuckart.com, on Twitter, and on Facebook.

Giveaway: Leave a comment below for your chance to win a print copy of Twice Told Tail. US entries only, please. The giveaway ends November 5, 2016 at 11:59 AM EST. Good luck everyone!

Like Loading...
This entry was posted in A DAY IN THE LIFE and tagged Ali Brandon, cozy mystery, Penguin Random House. Bookmark the permalink.