It’s All In A Day With Hollis Morgan by R. Franklin James 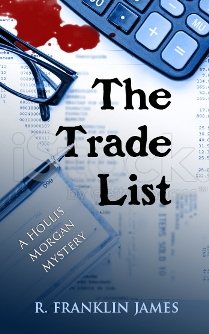 Waking up to the clang of the BART light rail train, took me back years ago when the sound of the bell was meant to wake me up and signal the start of another day in prison.

But that’s been awhile, and since then I’ve turned my life around, and except for a random memory, I could almost forget the year and a half I spent in California’s forced accommodations. However, nothing could make me forget the betrayal of my now ex-husband, who set me up to take the fall for his criminality. He swore that I would get off, because I’d never had a run in with the law, but we weren’t counting on a tough-on-crime judge who gave me three years for insurance fraud.

My immediate family would be considered dysfunctional on a good day, but the day I looked into my father’s eyes as they took me away, was the worst of my life. The fact that my mother ignored me and kept muttering :”. . .this is so embarrassing. . . to my sister and brother hurt me but then I’d never been able to count on her support.

So I served my time and got off in eighteen months for good behavior. I got out physically, but I still carried my cell with me. It has taken years for me to compartmentalize those months and put them behind me—not far behind, because I never want to completely forget how I lost myself.

It took some doing but I received a judicial pardon, graduated from law school, passed the California bar and now I’m working as a probate attorney for a small but respected law firm in the Bay Area.

Before I go out the door, I give a kiss on the forehead to my sleeping significant other, John Faber, without whom I’d be even more ensconced in the shell I started building for myself. He keeps me—hopeful.

Which reminds me, I’m going to be late for my meeting with George.

George Ravel is my managing attorney, not my boss but a mentor type I can bounce things off of, except that day before yesterday he surprises me with the fact that his newly discovered birth mother (I didn’t even know he was adopted) left him a fortune and he wants me to process the will.

The bad news is that I’ll have to tell him that not only did he inherit millions from his birth mother, he also inherited a bounty of the most obnoxious, greedy and desperate step-relations I have ever come across. They are determined to contest the will and do whatever they can to invalidate his share.

But it’s not in my nature to pass on a wrong that I can make right. This morning I plan to tell him that I’ve discovered a few key pieces of information that completely changes the outlook—and not all for the good.

This brings me to another case that’s making me crazy, yesterday I was contacted by the county sheriff. Evidently my business card was discovered on the car seat of a woman who was murdered. I didn’t recognize her name or description, but trying telling that to law enforcement when you’re an ex-con.

Supposedly, she’s known to have an incriminating list of names that many will pay—and kill, to keep from seeing the light of day. It’s just my luck that everyone thinks that she gave me a copy of the list—except she didn’t.

The Trade List is the fourth book in the Hollis Morgan mystery series, published by Camel Press, June 2016.

Hollis Morgan has come a long way since serving time for her ex-husband’s white-collar crimes. After receiving a state pardon, she is now a probate attorney at the Bay Area firm where she began as a paralegal. In a case close to home, her manager, George Ravel, inherits a fortune from his newly found birth mother, but her dead husband’s heirs are overcome with greed, not grief. They are determined to discredit her will and deny her natural son even one cent of the millions they believe should belong to their father’s estate.

George asks Hollis to handle the case, but her attention is divided. A dead woman has been discovered with Hollis’s business card–one that dates back to Hollis’s years on parole. The police don’t believe Hollis’s claim that she never met Olivia Shur. As it turns out, she did know the woman, only under another name. At the time of her death, Olivia Shur possessed a list that could end the careers and lives of several public officials and prominent businessmen. Copies of the list exist. Someone believes Hollis has one of them and will go to any extreme to obtain it.

To protect her friends and stay alive, Hollis turns to her ex-con buddies from the Fallen Angels Book Club. In this case, there are too many people on both sides of the law who are determined to see her stopped.

About the author
R. Franklin James grew up in the San Francisco Bay Area and flourished in a career of public policy and political advocacy. In 2013 the first book in her fan starred Hollis Morgan Mystery Series, The Fallen Angels Book Club, was released, and followed by Sticks & Stones, in 2014. The third book in the series: The Return of the Fallen Angels Book Club came out in 2015. Book four, The Trade List, is scheduled for release in June 2016. James resides in northern California.

Giveaway: Leave a comment below for your chance to win a print copy of The Trade List. US entries only, please. The giveaway will end June 7, 2016 at 12 AM EST. Good luck everyone!

Like Loading...
This entry was posted in A DAY IN THE LIFE and tagged Camel Press, R. Franklin James, traditional mystery. Bookmark the permalink.

29 responses to “It’s All In A Day With Hollis Morgan by R. Franklin James”