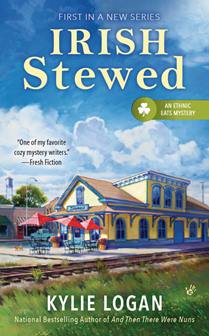 After flopping as a personal chef to a Hollywood movie star, jobless Laurel Inwood finds herself humbled in Hubbard, Ohio, helping her aunt Sophie run her restaurant. Much to Laurel’s dismay, Sophie’s Terminal at the Tracks is not the cozy bistro her aunt would have had her believe—it’s a run-down greasy spoon in an old railroad station. To save the dingy diner, Laurel cooks up a plan to feature alternating ethnic cuisine as specials.

But first there’s the problem of the body in the booth. Slumped over a table with a receipt spike in his back is Jack Lancer—”the Lance of Justice”—an investigative reporter for local TV news. Assisted by the drop-dead gorgeous owner of the neighboring Irish store—who may or may not be a suspect—Laurel sets out to track down a killer who had no reservations about impaling a newshound. But as she turns up the heat, will she end up in the soup herself?

Expectations. That’s what faces Laurel when she arrived at her aunt’s restaurant and this sets up this well-written light drama where a body is found and Laurel’s determination to find this killer who sits in plain sight. I loved the pacing of this story and how easily it flows from scene to scene. The author did a great job in providing a nicely woven plot and subplots that kept me intrigued as to how this was all going to play out. There were plenty of people in the town of Hubbard who could have done it and the author did a splendid job of cooking up clues to keep me moving forward as one by one, the killer’s identity came into focus and what a great set-up that was. Laurel is a complex person and I like seeing that as she struggles to fit and Declan is simply Declan. With a wonderful set of secondary characters with engaging dialogue and that small-town atmosphere, this was a delightfully entertaining debut to a series that I hope is here to stay.

Like Loading...
This entry was posted in Reviews and tagged cozy mystery, Kylie Logan, Penguin Random House. Bookmark the permalink.

6 responses to “My Musing ~ Irish Stewed by Kylie Logan”