A Day in the Life of Sabrina Shaw by Wendy Byrne 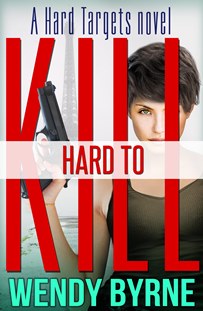 I’m Sabrina Shaw and I lead an interesting life, never knowing where I’ll be sent or what I might be doing. I work for an organization called The Alliance that specializes in hostage negotiation and retrieval. People who work for The Alliance go where no one else wants to.

Truth is, my two older brothers and I were orphaned when our parents were murdered. My oldest brother, Max, tried to tough it out raising us himself. But at the age of twelve, that proved to be more than he could handle, especially when I got sick. He had no choice but to enlist some help. The man who took us in groomed us to be assassins. His name was Goren Petrovich. You might remember him from Play Nice by Gemma Halliday. A master at mind control and manipulation, he lured us in with the promise of safety, home-cooked meals, and a roof over our heads. It wasn’t until later we figured out his real agenda.

The three of us—Max, Jake and I—left the assassin life a long while ago. But that doesn’t mean I’ve turned soft. The job at The Alliance keeps me on my toes.

When I found out a young girl disappeared, and The Alliance refused the job, as they considered it a low-probability-of-success-assignment, I had to step in. I couldn’t let her parents down. I was the only hope they had for getting their daughter, Caitlyn, back. Through a whole lot of work and some lucky breaks, I was able to trace a connection for where to start my search. What I didn’t expect was to be kidnapped. But that was only the beginning of my journey to find Caitlyn.

I’ll admit I’ve been in some tough spots before, but being drugged, naked and chained up was a first even for me. How do I get out of what sounds like an impossible situation? Not going to say, but here’s a preview of my predicament from Hard To Kill:

Sabrina used her elbow to maneuver to a sitting position. Her muscles screamed in protest but she managed to right herself. As soon as she did, flashes of lights danced before her eyes and the room began to spin. She brought her head between her knees to keep from passing out.

Damn. Whatever they gave her, it was powerful. The effects, combined with lack of food or drink, lingered like a bad hangover with a getting-the-crap-kicked-out-of-you chaser. An almost overwhelming urge pulled at her to give up the fight and slump back to the floor. She fought against the impulse, knowing all too well the line between momentarily caving and capitulating was tenuous. 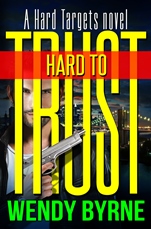 My brother Jake has his own story to tell in Hard to Trust. Jake’s assignment is guarding a CIA agent gone rogue, Tessa Graham. Let’s just say sparks fly and all manner of mayhem ensues. Here’s a short excerpt from Hard to Trust:

She rolled her eyes. “I can get out of this on my own, like I always do.” She pushed at his chest. “Back off, or I’ll scream.”

Her face was inches from Jake’s. His first unprofessional thought was that she was hot. His second thought corrected the first changing that descriptor to “breathtakingly beautiful.” He pressed himself to remember where a beautiful face had led in the past. And reinforced the idea she might very well be up to no good.

“And then what? The bad guys show some kind of fake badge and say they’re putting you under arrest, which we both know means they’re dropping you into the nearest landfill.” 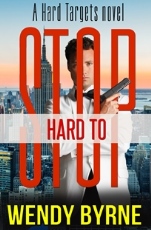 Yes, Jake’s in a heap of trouble. But that’s nothing compared to Max who has his hands full trying to ignore NYPD Detective Gianna Collini even while he suspects her brother of trying to kill him. Below is a short excerpt from Hard To Stop:

“Holy crap. This kid’s your brother?” Even though he said it as a question, there wasn’t one iota of doubt in his mind. That had to be the only explanation.

“That’s none of your concern, Mr. Shaw.” She had this take-charge thing honed to an art form.

But she’d met her match in him. He never backed down. Never. “It damn well is. How can you investigate this matter if your brother is the chief suspect?” His body nearly vibrated as thoughts tumbled around inside his head. His friend was dead because of him, and a detective related to the suspect was supposed to find the guilty party.

Series books—love them or hate them and why?  Leave comment below for a chance to win $10 Amazon gift card.

You can read more about Sabrina in Hard To Kill, the first book in the “Hard Target” romantic suspense trilogy, published by Gemma Halliday Publishing. The next two book in the trilogy are Hard To Trust and Hard To Stop.

All three books in the Hard Targets Series are on sale for .99 each this weekend only! Click HERE for the links.

GIVEAWAY: Leave a comment by 12 a.m. eastern on September 4 for the chance to win a $10 Amazon gift card. The giveaway is open to everyone. Winner will be notified within 48 hours after giveaway closes and you will have three days to respond after being contacted or another winner will be selected.

About the author
Wendy lives in the Chicago area. She has a Masters in Social Work and worked in the child welfare field for twelve years before she decided to pursue her dream of writing.

Between teaching college classes, trying to get her morbidly obese cat to slim down and tempering the will of her five-year-old granddaughter, who’s determined to become a witch when she turns six so she can fly on her broom to see the Eiffel Tower and put hexes on people–not necessarily in that order–somehow Wendy still manages to fit in writing. She spends the remainder of her days inflicting mayhem on her hero and heroine until they beg for mercy.

Like Loading...
This entry was posted in A DAY IN THE LIFE and tagged Wendy Byrne. Bookmark the permalink.