My Musing ~ Better Homes and Corpses by Kathleen Bridge 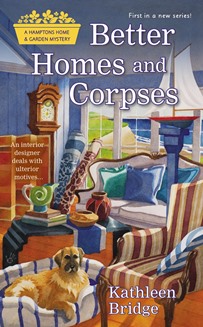 After Meg Barrett found her fiancé still had designs on his ex-wife, she decided it was time to refurbish her life. Leaving her glamorous job at a top home and garden magazine, she fled Manhattan for Montauk, only to find decorating can sometimes lead to detecting. . .

In between scouring estate sales for her new interior design business, Cottages by the Sea, Meg visits the swanky East Hampton home of her old college roommate, Jillian Spenser. But instead of seeing how the other half lives—she learns how the other half dies. Jillian’s mother, known as the Queen Mother of the Hamptons, has been murdered. Someone has staged a coup.

When she helps a friend inventory the Spensers’ estate for the insurance company, Meg finds herself right in the thick of things. Cataloging valuable antiques and art loses its charm when Meg discovers that the Spenser family has been hiding dangerous secrets, which may have furnished a murderer with a motive. As Meg gets closer to the truth, the killer will do anything to paint her out of the picture. . .

I like it. A chance meeting with a college friend gets Meg involved in a murder mystery that pulled me in and never let me go until the last clue was exhausted and a murderer was identified. I love the pacing and how the story flowed from chapter to chapter quickly becoming a page turner as I had to know what happened next. The author’s narrative in describing the scenes through the eyes of Meg placed me right there in the middle of all the non-stop action once the sleuthing began. Who was behind the murder? I had my suspicions and the presentation of all who had motive kept me in intrigued right to that aha moment where I knew the killer’s identity and I reveled in watching how it all played out with a couple of twisty turns that enhanced the telling of this tale. With Montauk and the Hamptons serving as the backdrop, this was a very enjoyable whodunit with good dialogue and a nice cast of characters and I look forward to learning more about Meg and her friends in the next book in this pleasantly appealing new series. Bonus vintage décor tips and recipes are included.