A Day in the Life with Monica Albertson by Peg Cochran 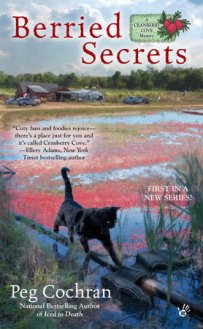 Cranberry Cove is certainly different from Chicago! Even though I’ve only been here for six weeks, when I walked into Gumdrops, the VanVelsen sisters’ candy store, they knew all about me—that I was here helping my half-brother on his cranberry farm—Sassamanash Farm—named after the Algonquin word for cranberry. Then I went next door to Book ‘Em and met Greg Harper, the owner, who clued me in to life in this small town on Lake Michigan. Everyone knows everyone and everyone not only knows everyone’s business—they make it their own!

For instance, after visiting Book ‘Em I went to Bart’s Butcher shop for a steak and all he could talk about was what a great guy Greg is and how he’s widowed and not seeing anyone! I think he was hoping to fix us up.

Tomorrow we start the cranberry harvest, and I’m going to give it a whirl myself. I’m a little nervous that I’m going to fall flat on my face trying to walk in those waders the crew wears. It’s quite a process—we have to flood the bogs, beat the berries from the vine and then, when they float to the surface, corral them toward a pipe that will suck them into a truck.

It’s quiet in town right now—Cranberry Cove is a tourist destination in the summer with its position right on the eastern shore of the lake. We get people on autumn color tours, too, and those will be starting soon—the leaves are just beginning to turn. Most of the shops in town cater to visitors—except for the hardware store, butcher shop and drugstore and of course the Cranberry Cove Diner. The diner might as well hang a sign outside saying “No tourists allowed.” It’s where the locals hang out and pass along gossip. The Diner is famous for its chili which isn’t even on the menu—if you don’t know about it, then you’re obviously not from Cranberry Cove.

I’d better get back to my baking—I bake all the goodies we sell at the Sassamanash Farm store, and it certainly keeps me busy.

You can read more about Monica in Berried Secrets, the first book in the NEW “Cranberry Cove” mystery series, published by Berkley Prime Crime.

When Monica Albertson comes to Cranberry Cove—a charming town on the eastern shore of Lake Michigan—to help her half-brother Jeff on his cranberry farm, the last thing she expects to harvest is a dead body.

It seems that Sam Culbert, who ran the farm while Jeff was deployed overseas, had some juicy secrets that soon prove fatal, and Jeff is ripe for the picking as a prime suspect. Forming an uneasy alliance with her high-maintenance stepmother, Monica has her hands full trying to save the farm while searching for a killer. Culbert made plenty of enemies in the quaint small town. . .but which one was desperate enough to kill?

GIVEAWAY: Leave a comment by 12 a.m. eastern on August 13 for the chance to win a print copy of Berried Secrets. The giveaway is open to U.S. residents only. Winner will be notified within 48 hours after giveaway closes and you will have three days to respond after being contacted or another winner will be selected.

About the author
Peg grew up in a New Jersey suburb about 25 miles outside of New York City. After her first husband died, she remarried and her new husband took a job in Grand Rapids, Michigan where they now live (on exile from NJ as she likes to joke).

Peg’s Lucille Series is published by Beyond the Page Publishing. Confession Is Murder, Unholy Matrimony and Hit and Nun are available for all e-book readers. She is currently working on the fourth book in the series.

You can read more about Peg and her books at www.pegcochran.com or catch up with her on Facebook.

Like Loading...
This entry was posted in A DAY IN THE LIFE and tagged Peg Cochran. Bookmark the permalink.