A Day in the Life with Eloise Alcott by Ellery Adams

My name is Eloise Alcott and I own Run for Cover, the bookshop in the village of Storyton.

I’ve always loved my job, but I don’t think I’ve ever loved it as much as I do right now. You see, my best friend, Jane Steward, the manager of Storyton Hall, the luxury resort for bibliophiles, is hosting a convention for readers and writers of Regency romance novels. With Valentine’s Day just around the corner, the timing couldn’t be more perfect. I am beside myself with excitement.

First, I love the Regency period. Think of all the Jane Austen novels! Think of Mr. Darcy! Need I really say more? I’ve created an entire display in my front window featuring Ms. Austen’s romantic leads and I’ll have to refill it five minutes after Mrs. Pratt catches a glimpse of the books. Even if she already owns some of the titles, she’ll end up buying them all over again. That’s how much she loves books. Not only is she my best customer, but she’s also a member of my book club, The Cover Girls.

Which reminds me! Our book club is meeting tonight to discuss our recent read, a delicious novel called

The Dashing Duke. The author, Rosamund York, is coming to Storyton tomorrow. Rumor has it that Rosamund and a handful of the other leading ladies of romance fiction aren’t very friendly, but what could go wrong over the next few days? After all, we’re having a Regency fashion show, learning to make reticles, attending author panels, competing in bookish trivia games, attending a truffle-making demonstration, and participating in a Ladies’ Choice Valentine’s Dance.

And did I mention the male cover model contest?

That’s right! We’re going to be sharing our tiny village with male cover models! All this and Mrs. 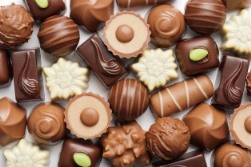 Hubbard’s famous Valentine’s tea spread. Oh, I can almost taste the Victoria sponge cake already. Between her cakes, scones, and finger sandwiches, as well as and platters of Regency-themed food I’ll be having at tonight’s book club meeting, I’d best pace myself. I want to catch the eye of one of those cover models. Or maybe that shy, new employee Jane hired to run the activities department. He’s a mysterious guy, to be sure. But then again, so is my brother, Edwin. I wonder what’s going on between him and Jane. . .

Oh! The bells hanging from my shop door are tinkling so I have to dash, but I hope you’ll join my

book-loving friends and me for what promises to be a thrilling week of sumptuous food, riotous fun, intrigue, and a touch of romance. I should add that I doubt there will be murders like those that occurred during Storyton Hall’s last convention. After all, mystery fans attended that event. This one centers on romance readers. It’ll be nothing but roses and plump cupids for an entire week.

Wait a minute. Isn’t cupid the one with the arrows? The one who shoots people? Who makes them unwitting victims of desire? A desire so intense that they cannot control their actions? Oh my. Maybe romance isn’t as harmless as I thought. . .

You can read more about Eloise in Murder in the Paperback Parlor, the second book in the “Book Retreat” mystery series, published by Berkley Prime Crime.

About Murder in the Paperback Parlor
The New York Times bestselling Book Retreat mysteries feature Storyton Hall, the perfect getaway for literature lovers—except when a guest tries to get away with murder.

With Valentine’s Day just around the corner, Jane Steward is organizing a week of activities for fans of love stories at her book-themed resort. But her Regency readers barely have time to brush up on their Jane Austen before tragedy strikes Storyton Hall. Rosamund York, one of the most celebrated authors in attendance, is killed.

Rosamund had as many enemies as she did admirers, including envious fellow novelists, a jealous former lover, and dozens of angry fans. It’s up to Jane, with the help of her book club, the Cover Girls, to catalogue the list of suspects and find a heartless killer quickly—before the murderer writes someone else off.

Giveaway: Everyone who read the first book in this series, Murder in the Mystery Suite,

has met Muffet Cat, the portly tuxedo. Leave a comment about anything relating to the first book or what your expectations are of the latest installment, Murder in the Paperback Parlor, for a chance to win a Muffet Cat Teapot. And here’s a bonus! A portion of the profit from the purchase of this teapot will go toward animal rescue efforts. It’s a total win-win for cozy readers and animal lovers. Giveaway ends August 7 at 12 a.m. eastern and is open to U.S. residents only.

About the Author:
Ellery Adams grew up on a beach near the Long Island Sound. Having spent her adult life in a series of landlocked towns, she cherishes her memories of open water, violent storms, and the smell of the sea. Ms. Adams has held many jobs including caterer, retail clerk, car salesperson, teacher, tutor, and tech writer, all the while penning poems, children’s books, and novels. She now writes full-time from her home in Virginia.

For more info visit Ellery at www.elleryadamsmysteries.com or on Facebook.

Like Loading...
This entry was posted in A DAY IN THE LIFE and tagged Ellery Adams. Bookmark the permalink.