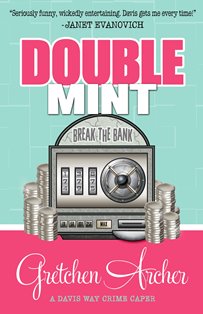 It’s convention season at the Bellissimo Resort and Casino and Davis Way Cole barely notices. It’s hard to pay attention when you live in a Jambalaya Junkyard. But when Special Events Coordinator Holder Darby walks off the job just as five hundred Alabama bankers pour in the front door, Davis steps up.

Or would that be in? Definitely in. Davis steps in. It.

Not only has the convention director vanished, but a certain Bellissimo guest is missing. One who forgot to pack the million dollars he left in the bathtub. It looks like our redhead newlywed Super Secret Spy’s lazy summer is over when the Bellissimo vault is robbed. Can Davis connect the dots before it’s too late? Can she get her Taser gun back from Bianca Sanders? Will she be stuck with Eddie Crawford’s 1962 Cadillac forever? What Davis needs is a little faith. And a lot of luck.

Love it! Davis has made her Way in this delightfully entertaining tour de force. The author’s descriptive and creative narrative pulled me in immediately in this fun-filled and action-packed drama that quickly became a page turner as I could not put this book down until the last sentence was read. The latest caper has Davis on full alert scrambling to solve a puzzling and intricate case that had ties to a missing event planner, a banker’s convention, a mint load of loot, and winning slot machines and when it is all put together, I was on a dazzling and fast-paced ride that I did not want to come off. Hilarity ensued as antics after antics and escapades after escapades kept me constantly engaged as the mystery of who was doing what to whom took hold and came full circle with some surprising results. This is the best one yet in this series and I can’t wait to see what happens next with Davis and her friends.

3 responses to “My Musing ~ Double Mint by Gretchen Archer”