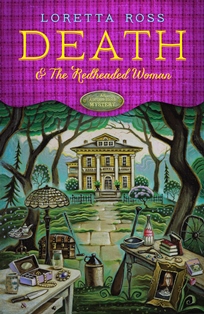 My name is Wren Morgan and I’m an auctioneer with Keystone and Sons Auctioneers, a family-owned company based in the little town of East Bledsoe Ferry, Missouri. You may have seen my name in the paper recently, after I went in to catalog the Campbell estate and found a naked dead guy on the stairs.

While dead bodies are a rarity, the fact is you find a lot of strange things when you’re preparing for an auction. One thing that always intrigues me is abandoned craft projects.

I don’t mean those that were interrupted by death, though there’s a certain poignancy to that; finding a half-completed afghan tucked into the corner of a well-worn easy chair, with the crochet hook stabbed into the ball of yarn and the hands that were working it forever stilled. But what truly feeds my curiosity is projects that were obviously set aside. Sometimes the reason is obvious, if the threads are tangled or the pattern has gone awry. But sometimes it’s not.

I once found a cedar chest full of perfectly-embroidered linens and tea towels. Everything was completed except for three towels and a pillowcase, already stamped with the pattern. The pillowcase was nearly finished, the still-threaded needle stuck through the cloth and the whole lot packed away and never used. The chest was in the estate of an elderly widower and I finally tracked down a daughter-in-law who knew the story.

His late wife had owned the chest before they were married and had been embroidering the linens as part of her trousseau. She stopped working on them when she found out he was allergic to the woolen embroidery thread she was using.

Sometimes the reason things get abandoned is heartbreaking.

In one estate I found a pink-and-white, crocheted baby dress, completed except for the final seams and about three inches of ruffling on the trim. The families of the people whose estates we sell don’t always come to the auctions. It can be a difficult thing to watch. The woman’s daughter was there, though, and I showed her the dress in case it was something she’d want to keep. She’d never seen it before, but was able to guess at an explanation.

Her parents had lost their first child, a newborn baby daughter, to SIDS.

The daughter didn’t want the dress. I considered buying it myself and finishing the work, even if only to give it to little Mercy Keystone for one of her dolls. In the end I did not. It seemed wrong to give a child something that had been made for the dead, so I let it go on to auction and pass to someone who didn’t know its sad history.

The strangest thing I ever found while preparing an auction, though (in terms of unfinished craft projects and barring naked dead men) was a Tupperware container that held thirteen 4″ Ohio star quilt blocks.

The Ohio star isn’t a difficult block, but these were tiny and pieced neatly and showed a certain level of skill. There were three each of red, yellow, and green stars and four blue. Thirteen quilt blocks does not make a quilt of any size no matter how you arrange them, so it was obviously the beginning of a larger project.

I found them, as I said, in a Tupperware container. Specifically, it was a vintage green Tupperware container dating to the early 1950’s. They’d been ironed flat, wrapped in brown tissue paper that had been trimmed from a sewing pattern, and put in the Tupperware. Then the Tupperware was wrapped completely in aluminum foil, wrapped again in a layer of duct tape, and labeled with a crude drawing of a skull-and-crossbones.

There was no one to tell me the story of the quilt blocks and these I did wind up buying. I added three plain white blocks and made a quilted wall hanging and every time I looked at it I wondered. Finally, almost three years later, I had a chance to talk to the man whose mother had owned that estate.

He didn’t know what I was talking about when I asked him about the quilt blocks, but when I described the package he recognized it. He hadn’t known what was inside, nor had his mother. It had already been wrapped up like that when she got it. It was in the bottom of a box of books she bought years and years ago.

You can read more about Wren in Death and the Redheaded Woman, the first book in the NEW “Auction Block” mystery series, published by Midnight Ink.

GIVEAWAY: Leave a comment by 6 p.m. eastern on February 17 for the chance to win a copy of Death and the Redheaded Woman. The giveaway is open to U.S. residents only. Winner will be notified within 48 hours after giveaway closes.

Meet the author
Loretta Ross is a writer and historian who lives and works in rural Missouri. She is an alumna of Cottey College and holds a BA in archaeology from the University of Missouri – Columbia. She has loved mysteries since she first learned to read. Death and the Redheaded Woman will be her first published novel.

Like Loading...
This entry was posted in A DAY IN THE LIFE and tagged Loretta Ross. Bookmark the permalink.

74 responses to “Discoveries With Wren Morgan by Loretta Ross”