My Musing ~ In Hot Water by J.J. Cook 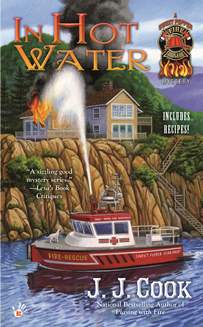 Sweet Pepper, Tennessee, has the world’s hottest and sweetest peppers—as well as a ghost that cooks and a fire chief who fights crime. . .

SPARK OF INTEREST
Stella Griffin should be bubbling over with joy now that she’s the full-time fire chief of Sweet Pepper, except trouble is brewing on her doorstep. An angry resident has purchased her cabin, and—with a bulldozer in tow—is ready to tear it down. But as Stella worries over the fate of her home and Eric, her ghostly roommate, there’s soon an even greater cause for alarm.

A suspicious house fire in the pricey Sunset Beach community at Sweet Pepper Lake claims the life of ex-state representative Barney Falk. The nature of the death has Stella feeling out of her depth, so she teams up with the state’s arson investigator. Moving full steam ahead with the case, they must smoke out a killer before the firebug strikes again. . .

In Hot Water is the best book thus far in this endearing series. Stella has claimed Sweet Pepper as her new home and when one of the citizens is found dead amid a raging fire, repercussions abound and it’ll be up to Stella, her team and Eric to solve this puzzling case with some surprising twists one of which put a smile on my face. In this light drama, the mystery was well-executed and kept me engaged throughout and I fell once again in love with the quirky inhabitants and the town of Sweet Pepper. The author gave as good as the drama that pulled me in immediately and did a little twist at the end and now I’m so eager to read the next book which I hope comes out soon because I need to know what happens next. This was a great read and I look forward to some good times spent with Stella and her friends.