A lifer in the innkeeping trade who got a chance to indulge her taste for adventure after the kids were grown, Elizabeth Gunn has been a liveaboard sailor, SCUBA diver and explorer through North America, Mexico and Europe. After a second career in travel writing, she settled in Tucson, and now writes two police procedural series.

In Tucson, her police detective is Sarah Burke, divorced, ambitious, hard-working, trying to stretch her days to include the job she loves and her cobbled-together family—a niece and mother with special needs and a laconic night detective who’s quietly devoted.

Thinking about the first time she met the Red Man, Sarah felt the wind grow colder.

The man in the red padded suit looked at her with his face showing nothing through the mask and said, “You’re in a fight for your life now, you understand?” When she nodded, smiling, a little cocky, he hit her in the face.

It wasn’t just a little tap; it hurt like hell. And the force of it knocked her down. Lying on the floor at his feet, she felt her confidence drain away like water down a sink drain. It was all she could do to get up, and as soon as she was back on her feet he hit her again. The merciless man with the toneless voice landed two more solid punches and a hard shove before she suppressed enough of the fear to look for some way to get at this monster, who was plainly bent on taking away the career she’d set her heart on.

The other thing she hadn’t known much about till that morning was rage. She learned a great deal about it in the next five minutes. Red hot rage flooded her brain and helped her go on fighting till she landed a couple of well-placed kicks she’d learned in Tai Kwon Do. They were good enough to earn a welcome grunt of surprise and appreciation from the Red Man, who quit pummeling her and said, “That’s more like it. Now let me show you what you missed at the beginning…”

In Minnesota, the protagonist is Jake Hines 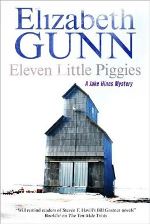 I was brought into the world one crisp October evening, late in the twentieth century, by a janitor who fished me out of a motel Dumpster in Red Wing, Minnesota. I was probably a couple of hours old, naked in a stiff breeze off the Mississippi and almost too cold to cry.

Smart money, if there had been any around, would not have bet on a bright future for this shriveled brown-skinned castoff with the puzzling face. But I caught a few lucky breaks—the Minnesota welfare system kept me from starving, and I was helped along the way by a great caregiver and a couple of talented teachers. So now, in my late thirties, contrary to reasonable expectations I’m not in jail or living under a bridge. In fact I’m a husband and father, with all the markers—the mortgage, the car seat, the worried frown from always being late. My name is Jake Hines, and I’m a cop.

You can read more about Sarah in Red Man Down, the fifth book in the “Sarah Burke” mystery series, published by Severn House. The first book in the series is Cool in Tucson. Books are available at retail and online booksellers.

GIVEAWAY
Comment on this post by 6 p.m. EST on May 5, and you will be entered for a chance to win a Kindle version of COOL IN TUCSON. One winner will be chosen at random.

Meet the author
A one-time innkeeper with a taste for adventure, Elizabeth Gunn has been a private pilot, a sky diver, a SCUBA diver, and a liveabord sailor. Extensive travel in the US, Canada, Mexico, and Europe led to a second career as a freelance travel writer, during which she also began writing a series of police procedural mysteries set in southeast Minnesota, where she grew up. Her books contrast the sometimes gritty routine of police work with the idyllic rural scenes around a mid-sized city in the midwest.

Like Loading...
This entry was posted in A DAY IN THE LIFE and tagged Elizabeth Gunn. Bookmark the permalink.