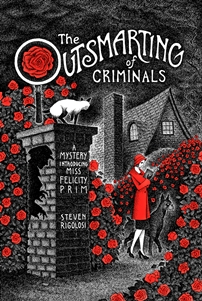 My parents, Mrs. Charity Prim and Mr. Cornelius Prim, raised me to believe that I am in charge of my life. “You are fortunate to have been born at a time of women’s progress,” Mother used to say. “You and your sister have choices that were unavailable to me. Make the most of them, Dearest.” Meanwhile, Father would nod sagely, not quite sure what to make of this so-called “women’s movement” in which his wife participated so vigorously.

So I made a life for myself in the city of my birth, New York, developing friendships, taking my degree at Barnard, and working in the office of Dr. Amos Poe, a much-beloved, old-world Manhattan doctor with a devoted staff and a set of equally devoted (and very demanding) patients (or, as we sometimes call them, “impatients”). In my spare time, I have tried to surround myself with the books I love while not getting too involved in this so-called “Internet,” which seems these days to attract an unhealthy level of attention and to have a distressingly large number of aficionados.

Then, in the blink of an eye, everything changed. While walking along East 32nd Street, minding my own business, I was mugged. The miscreant broke my arm and stole my purse; but worse than that, he took my dignity and my self-confidence. I saw this as a sign from the heavens that perhaps it was time to make a change, to move to the type of New England village I have always loved. So, hearing Mother’s words of encouragement in my head, I did it: I bought a small cottage in the lovely hamlet of Greenfield, Connecticut, which had come highly recommended by the Times Sunday Magazine.

The situation became much more complicated when, out of the blue, Doctor Poe admitted that he loves me and wants to marry me. What was I to do? I’d spent my life savings on that cottage, and I had the idea that I could do some good by outsmarting the not-very-violent criminals one can expect to find in a New England village. Having read my share of all the great mystery writers, past and present, I felt confident I had all the tools I needed to make a success of my new career. So I promised to consider Doctor Poe’s proposal – one cannot make these decisions quickly or lightly – and removed myself to Connecticut. Upon my arrival I immediately adopted a high-spirited Boxer named Bruno from the Greenfield Animal Shelter. One needs a bit of protection when one lives alone in the country…

Things started to unravel rather quickly after my arrival. My new home was not what I expected it to be. I discovered a secret passage and a hidden basement … and in that basement I found a dead man. I’d planned to start my career in criminal outsmarting helping to catch petty thieves and perhaps graffiti artists; I had not expected (nor had I wanted) murder so soon. And it quickly became apparent that someone has been watching me, perhaps waiting for the right moment to strike. I am now a “woman in jeopardy,” as devoted readers call their beloved heroines; but I will not be a victim a second time. I will not.

You can read more about Miss Felicity Prim in her debut, The Outsmarting of Criminals, published by Ransom Note Press. The book is available in hardcover and as an ebook for Kindle, Nook, and iPad.

Giveaway
Comment on this post by 6 p.m. EST on May 3, and you will be entered for a chance to win a signed copy of THE OUTSMARTING OF CRIMINALS. One winner will be chosen at random. Unless specified, U.S. entries only.

Meet the Author
Steven Rigolosi is the director of market research and development for a science publisher based in Manhattan. He

is also the author of Circle of Assassins, Androgynous Murder House Party, and Who Gets the Apartment? He received his B.A. from Manhattan College and his M.A. from Rutgers University. Library Journal has called him “a completely fresh voice in the mystery genre” and described The Outsmarting of Criminals as “a pleasure from cover to cover.” He maintains a blog, with occasional pieces of short fiction, at stevenrigolosi.wordpress.com. You can reach him at srigolosi AT yahoo DOT com.

Like Loading...
This entry was posted in A DAY IN THE LIFE and tagged Steven Rigolosi. Bookmark the permalink.