As Johnetta Chambers Sees It by Judy Alter 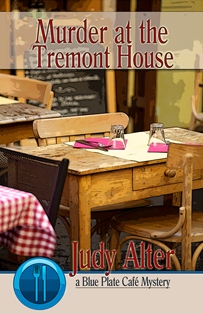 At the the opening of Murder at the Blue Plate Café, Kate Chambers beloved grandmother, who raised her and her twin Donna, has died suddenly. Kate comes back to Wheeler, Texas to run her grandmother’s café and deal with her unpredictable sister. But she keeps getting cryptic messages from Gram in the beyond.

Here’s how Gram sees things as the story moves into Murder at The Tremont House.

Well, drat! I don’t know what to do about those granddaughters of mine. Raised both alike, with love and discipline, taught them the value of work, did everything I knew to turn them into productive members of society.

I’m as pleased as can be with Kate. She’s taken over the café and is doing a great job with it. Oh, of course I wouldn’t be serving tuna salad and chicken salad—that’s not hearty café food and it takes too much time. And I’d be baking my own pies–she orders them from someplace in Tyler. But it’s not mine to say.

Kate’s a good girl, but I never am sure about her choices of men. ‘Course I didn’t know much about what went on when she lived in Dallas, but I heard things and they didn’t make me proud. Now she seems to have taken a shine to that new police chief…Rick Samuels. Cold fish, if you ask me. I think she needs a man with red blood in his veins—but she’d be shocked if I told her that. And I think she has a secret crush on Dave Millican that runs the nursery. Dave is as nice a boy as you’d want to meet, always jovial, always ready to do anything for you, but there’s a dark side to him and he’s been in trouble with the law. I sure don’t want her messing with that kind of thing.

Now she’s taken to letting Chief Samuels spend the night. She assures me he sleeps in a separate room and he’s only there to protect her, but I know how tongues wag in Wheeler. I cautioned her, but she asked, “Gram, would you rather see my reputation compromised or me dead?” What a thing to say to your grandmother!

And then there’s Donna—always was the troublesome twin, ever since she was a little tyke. Shotgun marriage when she graduated from high school, though I think I carried it off with grace and style. Well, now she’s decided she doesn’t want that handsome high-school football hero she married, and she doesn’t pay much attention to those three darling children. First she decides she has to run a B&B and spends all the money I left her fixing up the old Tremont farm house. Then she has an affair with that sleazy man from Dallas. She knows what I’d have said about that. Well, he got himself killed—but I haven’t seen him around up here.

Now she’s got that crazy boarder who’s writing an “exposé” about small town life. No good will come of that, but Donna’s so smitten by this woman that she’s abandoning her marriage and whatever good sense she ever had. I wouldn’t be a bit surprised if there wasn’t another murder in Wheeler.

I swear—and I’m not a swearing woman, never was—but I don’t know what to do with those girls. I went to the Lord about it, but he says to have faith. Well, I can’t tell them that when I’d give them a piece of my mind if I was there. But there are rules here…I can’t say much, and I can only offer advice which they don’t seem to understand. It’s enough to make an old woman turn over in her grave. 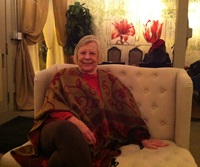 the successful Murder at the Blue Plate Café. Judy is also the author of four books in the Kelly O’Connell Mystery series: Skeleton in a Dead Space, No Neighborhood for Old Women, Trouble in a Big Box, and Danger Comes Home. With the Blue Plate Murder series, she moves from inner city Fort Worth to small-town East Texas to create a new set of characters in a setting modeled after a restaurant that was for years one of her family’s favorites.

Like Loading...
This entry was posted in A DAY IN THE LIFE and tagged Judy Alter. Bookmark the permalink.

5 responses to “As Johnetta Chambers Sees It by Judy Alter”