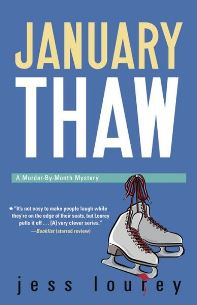 Private-eye-in-training Mira James loves Minnesota’s crisp January days, as long as she can spend them in the arms of hunky Johnny Leeson. But when Mrs. Berns’s erratic Zamboni driving uncovers an icebound dead man, Mira’s cold-weather tranquility threatens to melt away.

With a frozen body in the lake and a freak January thaw descending on town, neither Johnny nor generous portions of high-octane comfort food are enough to ease Mira’s frazzled nerves. There’s big trouble brewing in Battle Lake. And if Mira can’t figure out who’s behind it, the next time she feels sub-zero temperatures, she may be sporting a toe tag in the town morgue.

I love it when I open a book and it immediately enraptures me and I can’t put it down. Mira is an emotional wreck having recently survived a recent ordeal. So of course, it happens once again with the discovery of another dead body, which is woven into a riveting and thrilling drama that had me holding my breath in this action-packed and fast-paced mystery.

Jess knows how to engage the reader with a great plot with multiple layers that may or may not connected (you’ll have to read the book if you want to know the answer) and a great cast of characters that includes Mira, the ever-present Mrs. Berns as well as Johnny and the other cast that crosses Mira’s path. The dialogue is exceptional and the setting gave me the feeling that I was standing in a cold January Minnesota. Once again, Jess entertained me with her written words and I look forward to visiting Mira and the gang in February Fever (don’t you just love that title?), the next book in this fabulous series.