A Day in the Life of Diego Mendoza by Elizabeth Zelvin 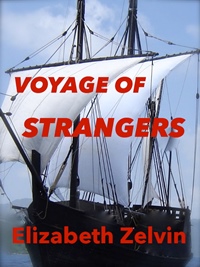 When I was a child growing up in Seville, Christians, Moors, and Jews still mingled in the narrow streets and markets of my beautiful city. But the shadow of the Inquisition was already upon us. I saw black Africans and Moors taken in the wars paraded through the streets in chains, the slave merchants hawking their wares as if these unhappy men, women, and children were so many oranges. I saw my first auto da fe when I was ten. King Ferdinand and Queen Isabella had decreed that all citizens attend, and my papa made me look, to bear witness and also that I would never forget how dangerous it was to be a Jew.

Things got worse. We were forbidden to use our tallit and t’fillin for prayer, then to pray to Adonai altogether. Then the worst happened: we were commanded to convert to Christianity. If we did not, we must leave Spain or face the rigors of the Inquisition. My father had the foresight to take precautions before this happened, so that we might not be completely destitute, for all who owed our people money were glad to see our backs and retain all our possessions. Papa arranged for the family to travel to Italy, where Lorenzo de Medici, the merchant prince of Firenze, was known to be tolerant of the Jews.

I would have gone with them but for an extraordinary stroke of fate. A Genoese named Christopher Columbus had long declared that a trade route to the Indies might be found by sailing west across the Ocean Sea. He believed these lands lay much closer than our scholars and geographers had yet determined. Papa knew Columbus, for they had survived a shipwreck off the coast of Portugal together in their youth. Thus it happened that on the very day the Jews said farewell forever to Spain, I sailed into the unknown with Admiral Columbus.

My days aboard the Santa Maria–measured in watches, rather than days and nights–were filled with hard work and discomfort. When our duties were done, we slept where we fell on the brine-splashed deck or on coils of heavy cable. But I felt an extraordinary freedom as well. I would climb up the rigging to the crow’s nest, raise my arms and face to the wind, and sing out my praise to God.

I made that crossing twice, for having found new lands, a veritable earthly paradise, and a strange people who had their own gods, thought gold pretty but of little value, and had never seen metal weapons or horses, the Spaniards were determined to grasp and hold as much as they could. On the first voyage, the Taino greeted us warmly, for they strive not to excel in wealth or prowess but to outdo each other in the extravagance of their generosity. When we came back, the fleet of seventeen ships bearing soldiers and settlers as well as sailors, they soon knew we had come to destroy them.

I had my sister Rachel with me then, disguised as a boy with none but the Admiral himself the wiser. My days consisted mainly of hard work building the settlements of Isabela and Santo Tomas and making our way through the tropical forest between them, torn between the beauty of the lush vegetation and brightly colored birds and the persistence of the mosquitoes. But occasionally, Rachel and I would slip away to visit our Taino friend Hutia. We would celebrate Shabbat as best we could with a stub of candle and say our b’ruchas to a chorus of birdsong. Then, in the Taino village, we would play batey, a ball game that the Taino used as religious observance and court of justice as well as sport. Those days I will always remember.

Meet the author
Elizabeth Zelvin is a psychotherapist and author of the Bruce Kohler mystery series as well as the Admiral Columbus and Diego Mendoza series, including the Agatha-nominated story “The Green Cross,” which first appeared in Ellery Queen’s Mystery Magazine, and Voyage of Strangers, her new novel about what really happened when Columbus discovered America. Liz’s stories have been nominated three times for the Agatha Award and for the Derringer Award for Best Short Story. Voyage of Strangers is available at Amazon. Liz’s author website is at www.elizabethzelvin.com

Like Loading...
This entry was posted in A DAY IN THE LIFE and tagged Elizabeth Zelvin. Bookmark the permalink.