A Skeleton in the Family by Leigh Perry 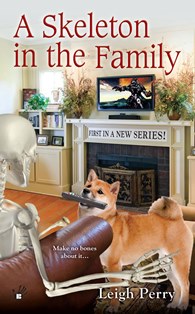 A Skeleton in the Family by Leigh Perry is the first book in the new “Family Skeleton” mystery series. Publisher: Berkley Prime Crime, September 2013

Most families have skeletons in their closets…

Moving back into her parents’ house with her teenage daughter had not been Georgia Thackery’s “Plan A.” But when she got a job at the local college, it seemed the sensible thing to do. So she settled in and began reconnecting with old friends.

Including Sid. Sid is the Thackery family’s skeleton. He’s lived in the house as long as Georgia can remember, although no one, including Sid, knows exactly where he came from and how he came to be a skeleton.

Sid walks, he talks, he makes bad jokes, he tries to keep Georgia’s dog from considering him a snack. And he manages to persuade Georgia to let him leave the house. But when she takes him to an anime convention—disguised as a skeleton, of course—he sees a woman who triggers memories of his past.

Now he is determined to find out how he died—with Georgia’s help. But their investigation may uncover a killer who’s still alive and well and bad to the bone…

Georgia is on the case when Sid sees someone from his past and wants her to get some answers, but all is lost when she is murdered which sends Georgia and Sid on a search for answers.

I like it. This is uniquely creative concept that was both playful and humorous in the telling of this intriguing mystery that hooked me from the start. Who is Sid? Who’s behind the murder? How does the Thackery family fit into the scheme of things? This will be answered in this light-hearted whodunit filled with amusing banter and a great cast of characters in this wonderfully crafted debut series. There’s no bones about it, I can’t wait for the next book in this exciting series.

Leigh Perry is the pseudonym for Toni L.P. Kelner

5 responses to “A Skeleton in the Family by Leigh Perry”