At Running Stitch With Angie Braddock by Isabella Alan 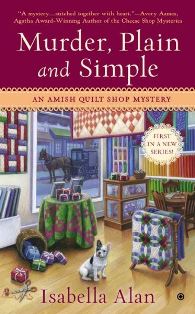 Clip-clop, clip-clop, rattle was the sounds that came through Running Stitch’s, my Amish quilt shop’s, open front door. I recognized it immediately. An Amish buggy. Without looking up from the cutting table where I was cutting surplus fabric in fat quarters, I knew it was a market buggy drawn by two horses with a heavy load in the back. Perhaps the buggy was making its way to the Amish auction that would be later in the day.

Oliver, my French bulldog, watched the buggy roll by at the front door but didn’t venture out. There were birds out they, and Oliver feared birds.

I chuckled to myself that I knew the type of buggy so quickly. I had only been in Amish country permanently for a few weeks, but it already felt like home, much more than my high rise, elegant, city life in Dallas ever had. Maybe I was a country girl at heart. That only made me laugh harder.

“Hmm,” a voice said. “You best not be laughing to yourself while you’re alone in the shop. You don’t know who might happen by and hear you. Folks are already suspicion of your fancy boots.” Anna Graber, an Amish woman who had been my Amish Aunt Eleanor’s best friend, eyed my prized cowboy boots, the one thing from my old life in Dallas that I held onto with a tight grip.

I grinned. “I like to give folks something to talk about.”

Anna snorted as she settled into the rocking chair by the front window. “You are good at too. Did you hear the latest that is making both Amish and Englischers tongues wag?”

She removed the bar quilt she was piecing from her quilting basket and said nothing more.

She threaded her needle. “You said that you were afraid to ask.”

“That’s just an expression. It doesn’t mean that I didn’t want to know.”

Anna pulled a stitch through the fabric. “You Englischers and your expressions. Why don’t you mean what you say? You’d have a much easier time.”

I sighed. “Anna, what’s the rumor? I would like to know, please.”

She smiled. “That the sheriff is sweet on you.”

I put my scissors down, feeling a knot in my stomach take shape. “I take it back. I don’t want to know.”

“Too late,” she said with a little too much pleasure if you asked me. “You will have to deal with it now.”

“Not if I can help it,” I muttered. I clicked my tongue at Oliver. The little black and white Frenchie waddled over to me. “This is the only guy I need in my life.”

Anna made a disbelieving sound but thankfully dropped it… at least for the moment. I knew the rest of the Amish quilting circle would take my singleness up as their next project. I was doomed.

You can read more about Angie in MURDER, PLAIN and SIMPLE, the first book in the new “Amish Quilt” mystery series, published by Obsidian.

Thanks to Penguin, I have one (1) copy of “Murder, Plain and Simple” to give away. Leave a comment to be included in the giveaway. Contest ends September 4; US entries only per publisher’s request.

It’s SUPER SEPTEMBER! Amanda Flower (also writing as Isabella Alan) has three novels releasing in September 2013. To celebrate, she is giving away an authentic Amish Quilt hand-stitched by Amish in Holmes County, Ohio.

Meet the author
Amanda Flower is the author of mysteries for children and adults. She has three novels releasing in September 2013: A Plain Disappearance and Murder, Plain and Simple (Amish cozy mysteries), and Andi Unexpected, a mystery for children ages 8-12. Murder, Plain and Simple she wrote under the pen name Isabella Alan. Amanda is an academic librarian for a small college near Cleveland.

Like Loading...
This entry was posted in A DAY IN THE LIFE and tagged Isabella Alan. Bookmark the permalink.