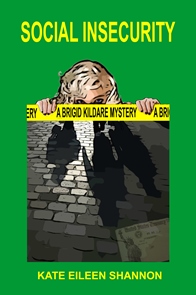 Hi, my name is Brigid Kildare. I’m a PI. Not the Jim Rockford kind, I’m not into car chases and guns and all that. I do research. You know, like title searches, background checks, forensic audits, all sorts of data kind of stuff. But stuff just sort of happens around me. A while ago some tenants of mine were killed and there was a bit of press and the next thing I knew, I had some crazy lady following me around and writing about me. I’m not sure how I feel about it. She makes me seem kinda bossy. She wrote a book called Social Insecurity about what happened with my tenants. And she’s written several more that will be out soon. Hey, a lot has been happening since 2011. Like I got married. You’ll hear about that in Dying Over Spilled Milk which will be the third book. And of course there was that whole period when my mother was suspected of murdering her husband. You’ll hear about that in Meditated Murder. Let’s just say she didn’t stick around to clear her name – she took off to Ireland. Which only made her look like totally guilty to the police, so I had to solve it.

But let me tell you what I’ve been up to lately. On May 2nd, they voted to make same sex marriage legal in RI as of August 1st. So my assistant Kevin proposed to Joseph. You’ll hear all about it in Not A Rhode Island Clue (book four) but let me give you a little preview of what has been going on around the place. It was wedding planning madness for months. The proposal on May 25th involved a gondola ride and a flash mob. Doing Beyonce, what else? And at just the right moment, Kevin got on one knee and did indeed put a ring on it! Did you know there is a big market for male engagement rings now? Well I do. I had to look at a ton of them before Kevin could make up his mind. And I tasted so many cake samples I thought I would be waddling around the place. The wedding was on August 3rd so Kevin and Joseph are on their honeymoon now. While the rest of us recuperate.

Well, I have to run now, tons of work to do. I have a stack of title searches and some employee background checks to do. They won’t get done unless I do it, with Kevin gone. Not that Kevin had done much the past few months anyway. Let me tell you, he was the ultimate bridezilla. Just wish I didn’t feel so nauseous. I never get sick. Wonder what that’s all about? 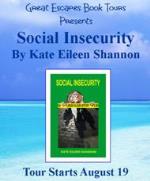 Thank you so much Dru for having me here and let me just mention the second book, Meditated Murder, will be available shortly. And as I am explaining on this tour, it is a serial as opposed to a series. Visit some of the other tour stops to find out what that means (no repetitive backstory). Be sure to comment at each stop to increase your chances of winning one of the books and be sure to leave your email address. Kate will be announcing the winners on her blog one week after the tour closes, on September 9th. Click here to follow the tour.

BLURB
Brigid Kildare is not your typical hard boiled private eye. But she doesn’t pretend to be. No matrimonial. No child custody. No bodyguard or surveillance work. No process serving. Brigid is strictly data. Asset searches, background searches, computer security, pre-employment screening, and basically any type of records research is what she deals in. And you really could not expect anything else. After all, your average five foot tall, blue eyed, blond (one friend describes her as looking like a Christmas tree angel) is rarely the person you would send out after a bail jumper. Oh, and there is that whole one leg thing – ADA aside, most people don’t think of an amputee as the go to person for a security job.

But in SOCIAL INSECURITY, the first in the Brigid Kildare Mystery Series, professional PI, Brigid Kildare, turns amateur sleuth when old ladies in the Federal Hill area of Providence start to go missing and she can’t get the police to believe her. As her assistant and long time friend, Kevin, puts it: “Honey, if an old lady like Jessica Fletcher can do it, a one-legged PI and her gay PA can do it too!” Brigid solves the mystery, along with an odd cast of friends and family, but not before four old ladies have died, she has caught the eye of a handsome Providence detective, and she discovers that not everyone who is close to her is what they appear to be.

Meet the author
Kate Eileen Shannon is a Writer, Artist, and sometimes Real Estate Agent – as she says, ‘a purveyor of ephemera and bagatelle’. Trifles. Little things. Here today, gone tomorrow. In other words, a little of this, a bit of that. She has had three husbands and two children; lived in Ireland, Rhode Island, and Florida; owned a brake repair shop, an art gallery, a farm, and a boat building business; been a Realtor, a title examiner, a real estate closer, and a government employee which led her straight to being unemployed, laid off, made redundant. Kate is currently living in Rhode Island overlooking the water and a lighthouse; with her husband, Dick Thomas (who won’t let her have a cat); where she spends her time painting, drawing, and of course working on the next book in the Brigid Kildare mystery series, MEDITATED MURDER.

Like Loading...
This entry was posted in A DAY IN THE LIFE and tagged Kate Eileen Shannon. Bookmark the permalink.