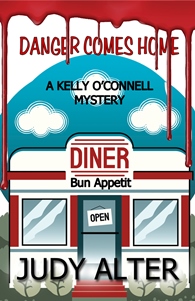 Kelly O’Connell’s husband, Mike Shandy, insists she has a talent for trouble, but how can she sit idly by while her world is shattering. Daughter Maggie is hiding a runaway classmate; protégé Joe Mendez seems to be hanging out again with his former gang friends and ignoring his lovely wife Theresa; drug dealers have moved into her beloved Fairmount neighborhood. And amidst all this, reclusive former diva Lorna McDavid expects Kelly to do her grocery shopping.

In spite of Mike’s warnings, Kelly is determined to save the runaway girl and her abused mother and find out what’s troubling Joe, even when those things lead back to the drug dealers. Before all the tangles in the neighborhood are untangled, Kelly finds herself wondering who to trust, facing drug dealers, and seeing more of death than she wants. But she also tests upscale hot dog recipes and finds a soft side to the imperious recluse, Lorna McDavid. It’s a wild ride, but she manages, always, to protect her daughters and keep Mike from worrying about her—at least not too much.

When Maggie brings home a surprise visitor, this takes Kelly, her friends and family on another adventure involving murder and mayhem as Kelly tries to protect another family from undue harm. This fast-paced drama quickly became a page turner as I had to know what was happening next. The author did a good job in keeping me in suspense with how the story evolved from scene to scene, even having me suspect that one of the friendly wasn’t being honest. A good job by Judy to prove me wrong. This well-written drama boasts a strong heroine who will always right a wrong, her loving husband, her two kids and a supportive group of friends. This is the best one yet in the series and I look forward to more adventures with Kelly and her friends.

7 responses to “My Musing ~ Danger Comes Home by Judy Alter”