The Spy in the White House Speaks by Dorothy St. James 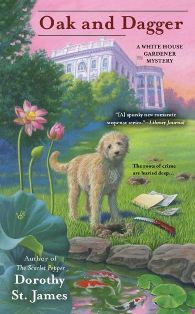 I swear that gardener, Casey Calhoun, must have some kind of sixth sense when it comes to sniffing out mysteries. I’m a master at the craft of espionage. I’ve brought down world leaders, destroyed crime lords, and no one—not even fellow spies—has ever suspected an outside force was responsible for these deeds.

Until the day I met Casey.

Oh, she looks so innocent as she works her way through the gardens wearing that silly oversized straw hat with the floppy rim. More often than not, her clothes are stained with garden soil. She acts as if she thinks of nothing but the flowers and trees under her care, but I’d heard about how in the past she’d caught murderers.

While those stories of her past adventures were impressive, I wasn’t worried that she’d notice anything about me. I’m a professional, an expert at NOT getting caught.

So how is it that this simple gardener, who can’t even keep the President’s dog from mangling the South Lawn, is on the verge of outsmarting one of the smartest spies to have ever lived? She keeps giving me these sidelong looks and asking questions that she shouldn’t even think to be asking. About me!

She’s turning me into a nervous wreck. I’m starting to pull my hair out!

If I’m not careful, everyone will know who I am. No matter what, that can’t happen. It would ruin everything I’d worked so hard to accomplish! Plus, if I fail, I’d surely become the butt of jokes in the spy community. I can’t let that happen to ME! I didn’t work all these years to become a legend among legends in this cutthroat business to let a gardener ruin me!

What’s a self-respecting spy like myself supposed to do? Scare her? Silence her? Kill her?

A Spy in the White House Gardens?

Stolen documents, death threats, mysterious holes in the South Lawn, and now a dead body in the garden! The evidence for the murder points to Gordon Sims, beloved White House chief gardener.

White House organic gardener Casey Calhoun, with the help of Special Agent Jack Turner, works to clear Gordon’s name. Soon Casey finds herself in a deadly race against time to discover the link between the missing stolen papers, the holes in the lawn, and a rumored 200-year-old treasure—before the killer strikes again… 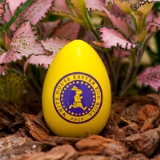 Dorothy is giving away an official White House Historical Association bookmark and a White House Easter Egg. Leave a comment to be included in the giveaway. The items will be shipped directly from the author. Contest ends April 20 and US entries only.

Meet the Author
Mystery author and Master Gardener Dorothy St. James was born in New York but raised in South Carolina. She makes her home on an artsy island community in South Carolina with her husband, two crazy dogs, and fluffy cat. An environmental urban planner by profession and wildlife biologist by education, she gave up her day job to devote her time to writing in 2001. She writes mysteries, romantic adventure fiction, Regency romances, and short stories. You can read more about Dorothy’s books at www.DorothyStJames.com , on Twitter or on Facebook.

Like Loading...
This entry was posted in A DAY IN THE LIFE and tagged Dorothy St. James. Bookmark the permalink.

24 responses to “The Spy in the White House Speaks by Dorothy St. James”