My Musing ~ Murder at the Blue Plate Café by Judy Alter 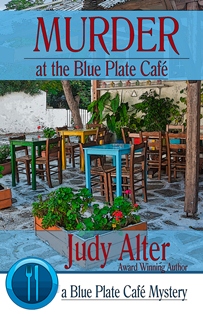 When twin sisters Kate and Donna inherit their grandmother’s restaurant, the Blue Plate Café in Wheeler, Texas, there’s immediate conflict. Donna wants to sell and use her money to establish a B & B; Kate wants to keep the Café. Thirty-two-year-old Kate leaves a Dallas career as a paralegal and a married lover to move back to Wheeler and run the café, while Donna plans her B & B and complicates her life by having an affair with her sole investor.

Kate soon learns that Wheeler is not the idyllic small town she thought it was fourteen years ago. The mayor, a woman, is power-mad and listens to no one, and the chief of the police department, newly come from Dallas, doesn’t understand small-town ways. Worst of all, blunt, outspoken Donna is not well liked by some town folk. The mayor of Wheeler becomes seriously ill after eating food from the café, delivered by Donna’s husband, and the death of another patron makes Kate even more suspicious of her grandmother’s sudden death.

When Donna’s investor is shot, all signs point to Donna, and she is arrested. Kate must defend her sister and solve the murders to keep her business open, but even Kate begins to wonder about the sister with whom she has a love-hate relationship. Gram guides Kate through it all, though Kate’s never quite sure she’s hearing Gram—and sometimes Gram’s guidance is really off the wall.

I like it. This evenly paced drama quickly became a page turner as I got caught up in the lives of Kate Chambers and her family and friends. The backdrop of the café played an important role in Kate’s determination in making a go of her new lifestyle while trying to solve the question of who killed her grandmother. The author did a good job in keeping me guessing with each clue leading closer to the truth with some surprises in store for Kate. This was a good read and I look forward to the next book in this pleasantly appealing series. Bonus recipes are included.

FTC Disclosure – I bought this book.