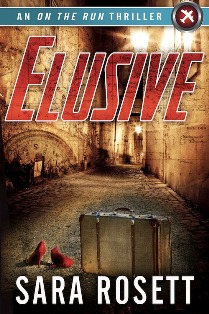 Elusive by Sara Rosett is the first book in the “On The Run” mystery/suspsense series. September 2012

Zoe thought traveling internationally would be exciting, but she never dreamed her first trip to Europe would involve fake passports and missing millions.

Divorced, twenty-something Zoe Hunter is a free spirit who strings together a variety of odd jobs to generate enough income to keep her bank account barely in the black. She loves living on the edge, but her life becomes too precarious, even for her, when her ex, Jack, disappears. Then his business partner is murdered and twelve million dollars vanishes from the company bank account. The local police think Zoe may be involved in the murder and the FBI suspects Zoe knows where the money is.

With the investigation zeroing in on her, Zoe is afraid to trust the police or the Feds because they both see her as a person of interest. Zoe impulsively skips town in a search for answers that takes her from Las Vegas to Italy, but instead of tracking down answers, she only uncovers more questions. Who was Jack? Is he dead or did he fake his disappearance? What was he mixed up in—art theft, the mafia, espionage, or all three?

We are introduced to Zoe Hunter who will be taken on a fast-paced, cross-country journey of mystery and suspense and what an enjoyably thrilling ride Elusive was. The action began immediately and was non-stop all the way as the story moved forward with surprising twists in this adrenaline-rush drama. The author did a great job in keeping it fresh and entertaining and I can’t wait to read the next book in this terrific new series.

2 responses to “Elusive by Sara Rosett”